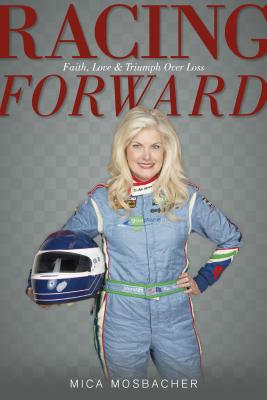 Mica Mosbacher was barely hanging on. A single mother of a son, she worked in retail while she established a career as an award-winning writer. Feeling unlucky in romance after two failed marriages, she gave up on her dreams. In her early 40s, she met the love of her life, oilman mogul and 28th US Secretary of Commerce, Robert Mosbacher Sr. A modern day commoner who went on to meet and entertain heads of states and Royals, Mica turned out to be a kind of Houston Cinderella.Mica married her prince and soul mate only to lose him to pancreatic cancer leaving her heart broken. But instead of wallowing in pain, she decided to grieve forward. Her brother, a racecar driver, inspired her to learn to race a Ferrari. Testing her personal limits on the racetrack, she discovered her inner strength to move forward.Life brings losses on a regular basis. Whether it's a garden variety loss or a life changing one--debilitating illness, divorce, death--it requires a resiliancy, optimism and faith.

Michele (Mica) Mosbacher, widow of 28th U.S. Secretary of Commerce and oilman Robert Mosbacher, Sr., is an author, motivational speaker and proud sponsor of Godstone Ranch Motorsports, a family professional motorsports team that races for charitable causes. She currently serves on the boards of the Houston Ballet and Universtiy of Houston; and was appointed by Governor Perry to the steering committee of the Aga Khan Foundation. In 2013, Mica was appointed by Her Majesty the Queen to the Order of St. John; in 2012 she was awarded the Silver Good Citizenship Medal, the highest honor from the Texas Society, Sons of he American Revolution. She was named Philanthropist of the Year in 2007 by TAASA (Texas Association Against Sexual Assault). Mica was Knighted by the Dynastic Order of King Francis I and accorded the title of Dame for Public Service. Born in Gainesville, Florida, Mica resides in Houston and Manhattan.
Loading...
or
Not Currently Available for Direct Purchase