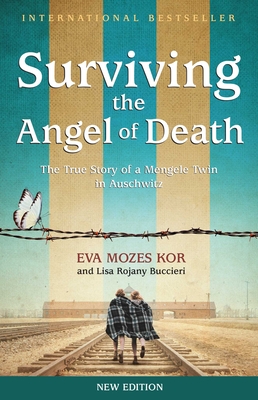 Surviving the Angel of Death

The True Story of a Mengele Twin in Auschwitz

Eva Mozes Kor was just ten years old when she arrived in Auschwitz. While her parents and two older sisters were taken to the gas chambers, she and her twin, Miriam, were herded into the care of the man known as the Angel of Death, Dr. Josef Mengele. Subjected to sadistic medical experiments, she was forced to fight daily for her and her twin's survival. In this incredible true story written for young adults, readers learn of a child's endurance and survival in the face of truly extraordinary evil and Eva's recovery and her controversial but often misunderstood decision to publicly forgive the Nazis. Readers will learn of how she triumphed over unfathomable pain and suffering into a life-long work for peace, human rights, and Holocaust education.

The new edition provides interesting details and important context to the events related in the original story. A new Afterword by publisher Peggy Porter Tierney offers a richer portrayal of Eva as a person, the truth behind the controversies,  and the eventful last ten years of her life.

Eva Mozes Kor was a resident of Terre Haute, IN. She was a recognized speaker, both nationally and internationally, on topics related to the Holocaust and social justice. Eva created the CANDLES organization in 1985 to locate other Mengele twins and found 122 twins throughout the world. She then opened the CANDLES Holocaust Museum in 1995 to educate the public about the historic event she survived. A community leader, champion of human rights, and tireless educator, Eva has been covered in numerous media outlets and is the subject of a documentary, Eva A-7063.

Lisa Rojany Buccieri has written over 100 children’s books, including several award-winning and bestselling titles. She is also a publishing executive and editor with over 20 years of experience in the industry. Lisa lives with her family in Los Angeles.
Loading...
or support indie stores by buying on
(This book is on backorder)