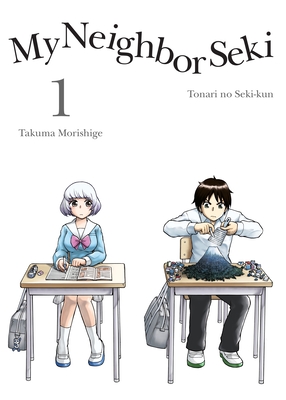 Toshinari Seki takes goofing off to new heights. Every day, on or around his school desk, he masterfully creates his own little worlds of wonder, often hidden to most of his classmates. Unfortunately for Rumi Yokoi, his neighbor at the back of their homeroom, his many games, dioramas, and projects are often way too interesting to ignore; even when they are hurting her grades.

Takuma Morishige was born in Miyazaki prefecture back in 1978. A professional comic artist, he earned an engineering degree from the University of Hiroshima. While Morishige has been working as a comic artist since 2001, he is best known for his work on My Neighbor Seki and for being the brother to the award-winning comic artist Akiko Higashimura. Morishige even appears as a character in Higashimura's autobiographical comic "Himawari..." In 2000 Morishige's debut project, Life Arts, was a finalist selection for the Chiba Tetsuya Comic Award. He would then turn his attention towards manga creation full-time in 2001. He has since developed six series, most of them being comedies.
Loading...
or support indie stores by buying on