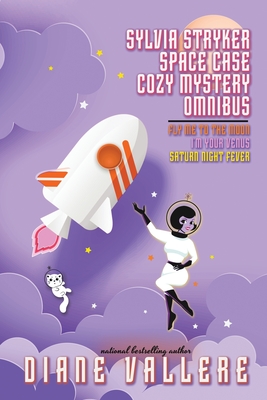 Meet Sylvia Stryker. Plucky. Professional. Purple. And about to take space by storm. Together in print for the first time, get the first three Sylvia Stryker Space Case Cozy Mysteries in a special edition .

When amateur sleuth Sylvia Stryker lands a job as Uniform Manager on a cruise ship in outer space, she jumps at the chance to leave her small planet behind. But when the ship's second navigation officer is found dead in the uniform closet shortly after departure, Sylvia's problems become bigger than folding the inventory. Juggling red shirts, white lies, and little green men, Sylvia now has to expose a killer before Moon Unit 5 becomes space dust.

When Sylvia Stryker boards Moon Unit 6 as uniform lieutenant, it's with an eye on the future. After space pirates destroyed her life, the trek to Venus provides a fresh start. But when the winner of the promotional contest designed to hype the trip is found dead outside the uniform ward, sleuthing takes top priority.

The amorous effect of Venus on the already frisky passengers threaten to compromise the investigation--not to mention the victim's secret relationship with Sylvia's boss. Forward thinking, back channels, and distractions on the side lead Sylvia on a pulse-pounding probe that exposes a murderer along with the surprising truth about her past.

When amateur space sleuth Sylvia Stryker discovers details of her defense instructor's murder hidden inside her robot cat, she sets off on a new adventure that puts her on the wrong side of the rules. Good thing Neptune, the head of security for Moon Unit Corporation, is on her side this time With his help, she hijacks a spaceship, assembles a crew, and takes on space pirates. But there's more to this trek than expected and Sylvia's focus on solving her friend's murder might lead her into a trap. Between the truth and the lies is a galaxy of questions that lead to an unexpected answer.

You'll adore this outer space cozy mystery omnibus for its humor and whimsy, and because everyone understands the universal desire to fit in.