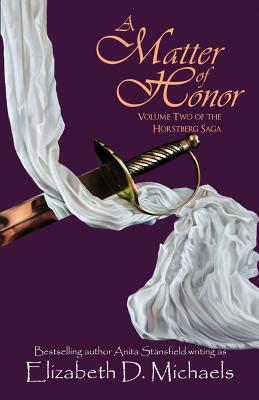 A Matter of Honor (Paperback)

When Honor Means More Than Anything To A Man, Can He Sacrifice His Honor For Love? Captain Lance Dukerk has no doubt that the only woman he ever loved married the right man-even though that man wasn't him. Yet he longs to have that kind of love in his life and is growing weary of being known as the most eligible bachelor in Horstberg's military force. When poverty-stricken Nadine Rader arrives at Castle Horstberg, insisting that her young daughter is the legitimate child of the duke, it becomes increasingly evident that the deceased ruler Nikolaus du Woernig left a torrent of disillusionment and heartache in his wake. Inexplicably drawn to Nadine, Lance takes personal charge of seeing that her needs are met as she attempts to piece her life back together. Their mutual attraction quickly merges into something profound, until Nadine discovers that Lance's connections to Nikolaus go far deeper than she'd ever imagined, and her budding trust in Lance shatters. Nadine's life becomes more troubling as women who fit her description are brutally murdered, and neither she nor Lance are prepared to face startling evidence that widens the chasm of mistrust between them. While Nadine fights to stay alive, Lance relentlessly tracks the monster responsible for these horrendous crimes, hoping he'll be in time to protect the one woman he knows he can never live without.

Elizabeth D. Michaels began writing at the age of sixteen, immersing herself ever since in the lives created by her vivid imagination. Beyond her devotion to family and friends, writing has been her passion for nearly three decades. While she has more than fifty published novels under the name Anita Stansfield and is the recipient of many awards, she boldly declares The Horstberg Saga as the story she was born to write, with many volumes in the works. She is best known for her keen ability to explore the psychological depths of human nature, bringing her characters to life through the timeless struggles they face in the midst of exquisite dramas. For more information, please visit her author page on WhiteStarPress.com.
or support indie stores by buying on
Copyright © 2020 American Booksellers Association