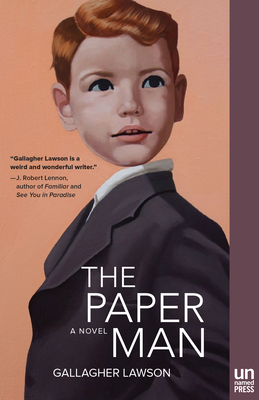 Michael was only 15 when a mysterious accident changed his life forever. He was rebuilt out of paper by his father, and ten years later he is still trapped in the paper version of his teenage body. To escape his stagnant life at home, he runs away to the city by the sea, which promises art and adventure. Instead, Michael discovers the city is tearing at the seams. With rumors swirling that a militarized north will annex the city, newcomer Michael has more to worry about than the unpredictable seaside weather. After being rescued from a rainstorm by Maiko, an unemployed fur model, Michael's cruel high school sweetheart Mischa suddenly reappears. Michael becomes torn between loyalty to Maiko and Mischa's decadent underground art world. But when he finds himself drawn to the city's most notorious artist, David Doppelmann, Michael begins another dangerous transformation, one that will either lead to uncovering his true self, or destroy him and everyone he cares about. Part fable, part surrealistic journey, Gallagher Lawson's impressive debut is a gripping narrative about the nature of artistic identity and its tenuous relationship to the greater good, Lawson has created a visionary, allegorical novel of our time.

Gallagher Lawson is a graduate of U.C. Riverside's Palm Desert M.F.A. program. He has worked as a travel writer and technical writer, and plays classical piano. He lives in Los Angeles.
Loading...
or
Not Currently Available for Direct Purchase