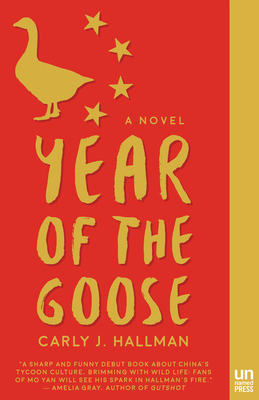 Year of the Goose

“Sometimes too much pineapple turns your tongue into a caterpillar, all that acid seeping through. Between detailing a government-sanctioned fat camp meant to 'rehabilitate' China's morbidly obese children and the brutal assassination of China's richest man -- Papa Hui, CEO of Bashful Goose Snack Company, China's most profitable corporation -- Hallman's Year of the Goose contains that same tartness. Snarky and sinister, this debut novel will make you both cackle and cringe.”
— Annalia Linnan (W), Brazos Bookstore, Houston, TX
View the List

As China's economy booms, so do its corporations, but none are as successful as the Bashful Goose Snack Company. Founded by Papa Hui, the company is a national treasure, as is his inspiration and beloved pet: the goose. Papa Hui's daughter, Kelly, isn't quite as adored, but she has a new and exciting post in her dad's company: head of the corporate responsibility department. There she is tasked with helping solve the obesity problem plaguing the country's children. Kelly founds a fat camp, where a series of gruesome accidents take place. While Kelly fears for her job, the government views the project as a success -- the province is no longer the nation's leader in childhood obesity. Kelly returns to the city where she meets hair tycoon Wang Xilai, and we are introduced to the grotesque life of a modern day Gatsby. When Papa Hui is brutally murdered, chaos ensues. Wang Xilai's muse Lulu flees to a hipster idyll, and she is soon joined at the oasis for millionaires by an insane Wang and desperate Kelly. Out of the absurdist satirical tradition of Mo Yan comes a hard-hitting yet whimsical portrayal of China's new tycoon culture.

Carly J. Hallman has a degree in English writing and rhetoric from St. Edward's University in Austin, TX. She lives in Beijing. Year of the Goose is her first novel.
Loading...
or support indie stores by buying on