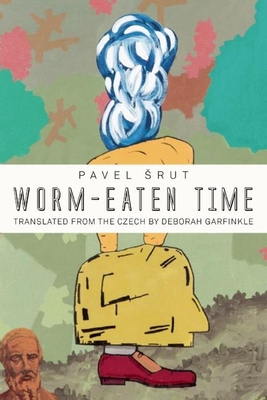 Pavel Srut's Worm-Eaten Time collects the seminal work of one of Czech Republic's most important living poets, in an award-winning translation by Deborah H. Garfinkle. With dark humor and surprising tenderness, Srut's Soviet-banned masterpiece is an elegy for Srut's fallen homeland, written in the months following the Soviet invasion. An essential addition to the canon of twentieth century banned literature, his work as a poet testifies to the power of poetry and the human spirit that can overcome the forces that would silence an individual's will to speak the truth.

Pavel Srut (b. 1940) is an award-winning poet, essayist, writer and translator who belongs to the generation of post-war Czech writers whose voices gained prominence in the flowering of Prague Spring, voices silenced by censorship in the aftermath of the 1968 Soviet Invasion of Czechoslovakia. Srut earned the Jaroslav Seifert Award in 2000 and the Czech PEN Club's Karel Capek Prize for lifetime achievement in literature in 2012. Aside from being a poet, rock lyricist and translator, Srut is also a celebrated writer of children's literature. He lives in Prague, Czech Republic, where he was named Czech Writer Laureate for 2015. Deborah Helen Garfinkle is a writer, poet, and translator whose criticism, translations, and creative writing have appeared in literary reviews and journals in the US and abroad. Worm-Eaten Time is Garfinkle's second full-length translation from the Czech, and its translation won her a Literary Translation Fellowship from the National Endowment for the Arts and a PEN/Heim Translation Fund Grant. Her first book, The Old Man's Verses: Poems by Ivan Divis, was nominated for the 2008 Northern California Book Award. She lives in San Francisco.
Loading...
or support indie stores by buying on