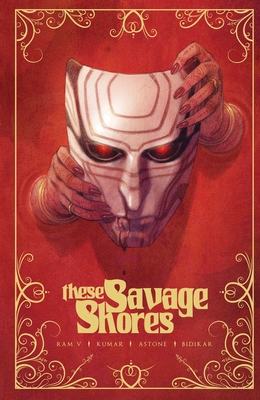 In 1766 an insatiable vampire sails from London to the Malabar Coast, aboard an East India Company ship. But along the shores of the Indus lurk darker and more ancient powers, and a war is brewing in the night.

ALONG THESE SAVAGE SHORES, WHERE THE DAYS ARE SCORCHED AND THE NIGHTS ARE FULL OF TEETH.

Two centuries after the first European ship sailed to the Malabar Coast and made landfall at Calicut, The East India Company seeks to secure its future along the lucrative Silk Route, in the year 1766. An old evil now sails aboard a company ship, hoping to make a home in this new found land. But he will soon find that the ground along the Indus is an ancient one with daemons and legends far older than himself.

Ram V is an award-winning author and creator of comics & graphic novels such as These Savage Shores and Radio Apocalypse (VAULT COMICS), Paradiso, Blue In Green, The Many Deaths of Laila Starr, Grafity’s Wall & Ruin of Thieves. His short stories and comics have appeared in several anthologies.

Aditya Bidikar is a comics letterer based in India. His recent work includes The White Trees, Little Bird, Bloodborne and These Savage Shores, among others.

https://www.instagram.com/adityabidikar/
Loading...
or support indie stores by buying on
(This book is on backorder)