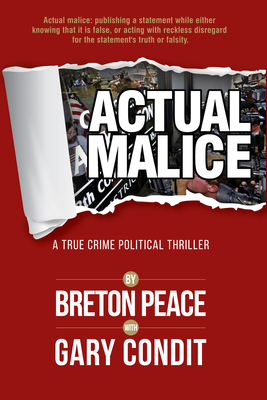 Actual Malice is a true crime thriller that will take you through the backrooms of political gamesmanship, deception, and cover-up. If it were a novel, readers would marvel at the rich character development, riveting pace, and often-bizarre twists that make Actual Malice a compelling read. The fact that it is scrupulously documented nonfiction is sobering.

If you know nothing about Gary Condit or the tragic death of Chandra Levy, there has never been a more engaging and thoughtful introduction to the sordid interplay between politicians, law enforcement, and the media. Actual Malice should be required reading for any public figure.

If you followed the story of the murdered intern and the congressman driven from office by one of the most intense media cyclones in history, Actual Malice will challenge virtually everything you think you know.

To begin, Carolyn and Gary Condit had come an incredible distance together since setting out from Oklahoma for California where Gary and the Condit family name became synonymous with the Central Valley.

In May of 2001, the moderate Blue Dog Democrats--of which Condit was a founding member--held significant power in Congress. Condit had used the coalition to deliver bipartisan victories in Bill Clinton's second term and was now flexing that muscle on the House Intelligence Committee. Condit accomplished what few of his generation could achieve--genuine political independence from both political machines.

The sky was the limit.

When Chandra Levy--a twenty-four-year-old Bureau of Prisons intern--disappeared in 2001, the wheels came off Gary's ambitions. Accused of having an affair with Levy, a whirlwind of rumor, intrigue, and treachery surrounded him.

More than a decade of lies, manipulation, and deception followed until, in 2016, the justice system cracked under the stress of its own spinelessness.

Actual Malice chronicles in vivid detail the heartache and intrigue behind the salacious, if fanciful, headlines that too often drive public debate and derail the serious business of our nation and its system of justice.