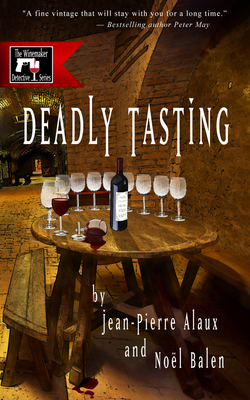 A serial killer is on the loose in Bordeaux. A local chief detective calls wine expert Benjamin Cooker to the crime scene of a brutal murder. The killer has left a strange calling card: twelve wine glasses lined up in a semi-circle with the first one filled with wine. Cooker is charged with the task of identifying the fabulous grand cru and is astonished by what he learns. A second victim is found, with two glasses filled. Is the killer intentionally leaving clues about his victims and his motives? Memories are jogged about the complicated history of Bordeaux during Nazi occupation. It was a dark time: weinfuhrers ruled the wine trade, while collaborationists and paramilitary organizations spread terror throughout the region. In present-day wine country, time is running out. Will Cooker and his young assistant Virgile solve the mystery before all twelve glasses are full?

Jean-Pierre Alaux is a magazine, radio and television journalist when he is not writing novels in southwestern France. He is a genuine wine and food lover, and won the Antonin Careme prize for his cookbook La Truffe sur le Souffle, which he wrote with the chef Alexis Pelissou. For him, "there is no greater common denominator than wine."
Loading...
or
Not Currently Available for Direct Purchase