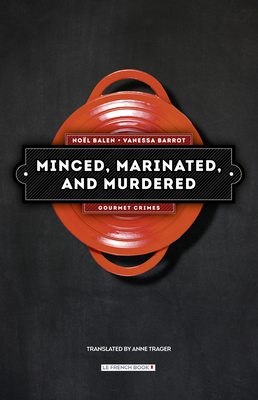 When food is so much more than a meal... A routine assignment in Lyon, France's traditional capital of gourmet food, turns bitter for food writer Laure Grenadier when a beloved chef is found murdered. A wave of panic follows with a second death, and Laure sets out to find the truth. As she reviews the city's traditional bistros, interviews the town's best chefs and local food producers, and shares stories and culinary lore with her photographer Paco Alvarez, she uncovers secrets and rivalries. But will she find the murderer before the city loses more of its master chefs?
Laure's passion for food and deep knowledge of culinary history combine with a reporter's natural curiosity and a particular Parisian chic, turning her into a natural sleuth in a city where food is so much more than a meal. Paco's photographer's eye brings the details to life, while murder and mayhem spice up the mix. In this fun, satisfying, mouth-watering French mystery novel, authors No l Balen and Vanessa Barrot whisk readers to France for a troubling mystery, local culinary anecdotes, recipes, home-grown products, and very human feelings. "When you feel as much hunger as grief, then you know you're still alive.