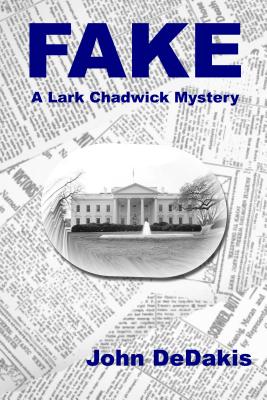 Author, Journalist, Educator, and Writing Coach John DeDakis is a former CNN Senior Copy Editor for the Emmy and Peabody-Award winning news program "The Situation Room with Wolf Blitzer." DeDakis (pronounced deh-DAY-kiss) is the author of four previous mystery/suspense novels, Fast Track, Bluff, Troubled Water, and Bullet in the Chamber. Bullet in the Chamber is the winner of Reviewers Choice, Foreword INDIES, and Feathered Quill book awards in 2017. The first two novels are set in Wisconsin where the author grew up: Troubled Water is set in Georgia where the author worked for 17 years as a journalist at CNN in Atlanta. Bullet in the Chamber and Fake are set in Washington, D.C. where the author lived for 13 years and was a White House correspondent. The books feature Lark Chadwick, a young woman searching for purpose in life who finds it as a journalist. The novels deal redemptively with issues of suicide, journalistic integrity, anonymous sources, mentoring relationships, presidential politics, and various public policy issues. In Fake, Lark, as a White House correspondent, investigates the sudden death of the First Lady as Lark, herself, is the victim of "fake news." Each book in the Lark Chadwick series is written to stand alone -- they don't need to be read in order. From 2013 to 2015, DeDakis was an adjunct journalism faculty member at the University of Maryland-College Park. John DeDakis, a native of La Crosse, Wisconsin, began his journalism career in 1969 at a campus radio station at the University of Wisconsin-Madison where he was tear gassed while covering an anti-Vietnam War riot in 1970. He earned a B.A. in Journalism from that university in 1977 following a stint in the U.S. Army where he worked from 1972-74 as a Special Events Reporter at The American Forces Network - Europe (AFN-E) based in Frankfurt, Germany. During that time he interviewed legendary film director Alfred Hitchcock. In 1970, DeDakis was the first news director of WLSU-FM (88.9 NPR) located on the campus of the University of Wisconsin - La Crosse. From 1976 to 1983, DeDakis was a reporter at WMTV (NBC-15) in Madison, Wisconsin. From 1983 to 1988, he was a correspondent with CBN News in Virginia Beach, Virginia. DeDakis was CBN's White House Correspondent during the last three years of Ronald Reagan's presidency. In addition to interviewing Ronald Reagan, John also interviewed former president Jimmy Carter. In March 2013, DeDakis retired from CNN after a 25-year career there that began in 1988 when he joined the network as a writer. From 1989 to 2013, he copy edited newscasts anchored by Wolf Blitzer, Carol Costello, Bill Hemmer, Martin Savidge, Daryn Kagan, and Kitty Pilgrim. DeDakis regularly leads "From Novice to Novelist" writing workshops at numerous writers' conferences around the country, as well as at an immersive writing retreat in Ireland, and aboard the Coral Princess on a cruise to the Panama Canal. He was also the Writer in Residence at the Callanwolde Fine Arts Center in Atlanta in the spring of 2013. For the past two summers, he has led writing workshops at the Chautauqua Institution in New York. DeDakis taught a journalism/writing class for student interns during the summers of 2007/08 as a lecturer at American University, Washington, D.C. (Guest speakers included legendary White House Correspondent Helen Thomas, Bob Schieffer of CBS News, and Michael Ruane of the Washington Post.) DeDakis is a member of Sisters in Crime and Mystery Writers of America. In 2013, he served as a judge for MWA's Edgar Award for Best Mystery Novel (Hardcover). John DeDakis lives in Baltimore, Maryland. You're invited to send him a friend request on Facebook, follow him on Twitter @johndedakis, and visit his website at www.johndedakis.com
or support indie stores by buying on
Copyright © 2020 American Booksellers Association