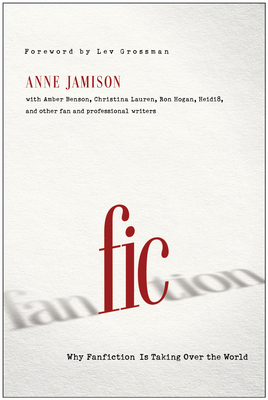 Why Fanfiction Is Taking Over the World

What is fanfiction, and what is it not? Why does fanfiction matter? And what makes it so important to the future of literature?

Fic is a groundbreaking exploration of the history and culture of fan writing and what it means for the way we think about reading, writing, and authorship. It's a story about literature, community, and technology—about what stories are being told, who's telling them, how, and why.

With provocative discussions from both professional and fan writers, on subjects from Star Trek to The X-Files and Buffy the Vampire Slayer to Harry Potter, Twilight, and beyond, Fic sheds light on the widely misunderstood world(s) of fanfiction—not only how fanfiction is transforming the literary landscape, but how it already has.

Praise For Fic: Why Fanfiction Is Taking Over the World…

"This definitive volume offers a rich immersion into fanfiction and is for anyone who has both loved and lived for the unique community of fandom, as well as for those who desire a look into this world or who are curious about the unexpected impact fic is having on the literary realm."
—Library Journal

"Jamison takes readers on a tour of the [fan fiction] field as it developed in the 20th century, focusing on television- and book-based fan fiction of the 1990s and 2000s, a period when technology allowed people across the globe to share their enthusiasms online . . . [Fic] takes a sympathetic and supportive look at the unconventional practice, highlighting both its precedents and the benefits this mixing of ideas can bring . . . Those unfamiliar with the field would do well to read this text."
—Publishers Weekly

"Anne Jamison's Fic is an indispensable guide to the dizzying world of fanfiction—its history, names, games, and creative promise. With her own exuberant and informative criticism, provocative interviews with writers, lively essays by readers and activists, and engaging examples from the kingdoms of fandom, Jamison demonstrates the zest for innovation that has made fanfiction both popular and avant-garde."
—Elaine Showalter, Professor Emerita of English and American Literature, Princeton University

"Jamison is at pains to stress that she doesn't think fan fiction can be 'represented by a single voice, least of all mine.' So Fic includes several essays by and interviews with fic authors (and a handful by Jamison's fellow scholars) recounting their experience in the genre. . . . in one of Fic's many fascinating moments, contributor Jacqueline Lichtenberg remembers first hearing of [Kirk and Spock slash] in the early '70s, at a party convened to hand-collate Star Trek zones."
—Pacific Standard

"Jamison guides the curious down the rabbit hole in Fic, a lively collection that pulls together contributions from fic writers, novelists, academics, attorneys and even a couple of Hollywood actors to educate the neophyte. . . . The essays are full of wonderful nuggets."
—The Hollywood Reporter

"Fanfiction readers and writers may find something new in the historical background offered by Jamison—or more likely, will enjoy re-engaging with the old debates. . . . Readers who are less familiar with the world of fanfiction will find Fic educational and insightful, even if they are not familiar with all of the fandoms described here."
—Hypable.com

Anne Jamison is associate professor of English at the University of Utah, where she teaches and writes about literature and culture from the 18th century to the present. She holds a PhD in Comparative Literature from Princeton and is the author of Poetics en passant (Palgrave, 2009), the forthcoming Kafka's Other Prague, and a variety of essays and articles—as well as a blog about teaching fanfiction, and a lot of tweets. Her work on fanfiction has been quoted in publications from The New York Review of Books to The Wall Street Journal to Entertainment Weekly's Popwatch. She lives happily in Salt Lake City in a house full of children, basset hounds, and an avant-garde poet. And yes, of course she's written fic.
Loading...
or
Not Currently Available for Direct Purchase