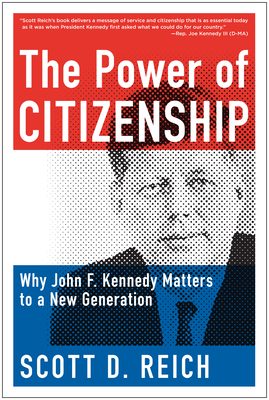 The Power of Citizenship

Why John F. Kennedy Matters to a New Generation

Fifty years after John F. Kennedy's death, we find ourselves enmeshed in an era of political division and cynicism, where politicians talk past one another and the spirit of “Ask not what your country can do for you—ask what you can do for your country" is less visible than it should be. We seem to have forgotten that we're all on the same team. Fortunately, Scott D. Reich has given us The Power of Citizenship, a timely book to bring us back on track.

Reich asserts that the most powerful element of Kennedy's legacy is his emphasis on the theme of citizenship, and that a rededication to the values Kennedy promoted will shine a bright path forward for our country. Evoking the hopes and aspirations of the 1960s, Reich recaptures the excitement of the Kennedy era. But what truly sets this book apart is the unique way it blends the romance of Camelot with the new frontiers of today—not only identifying modern challenges, but also offering a tangible blueprint for how we can improve our public discourse, be good citizens, and lift our nation to new heights of greatness.

Part history and part call to action, The Power of Citizenship hones in on the very essence of what made JFK so inspirational and timeless, reminding us once again that we must ask what we can do for our country. This is a must-read for Americans of all generations.

Praise For The Power of Citizenship: Why John F. Kennedy Matters to a New Generation…

"Scott Reich's book delivers a message of service and citizenship that is as essential today as it was when President Kennedy first asked what we could do for our country. At a time when it can be easy to focus on the differences that divide us, Scott makes a powerful and compelling case for the values that unite us."
–Rep. Joe Kennedy III (D-MA)

"Scott Reich's The Power of Citizenship is the best and most interesting book written on the Kennedy Presidency in decades. But above all, The Power of Citizenship is one of the most moving books I have ever read on patriotism and citizenship, and the power of leadership to inspire both. This book will be read as a primer and a classic on the subjects it covers for many years to come."
–David Eisenhower, bestselling author of Eisenhower at War, 1943-1945

"Scott Reich has produced a timely look back at the meaning of the Kennedy Presidency and, even more importantly, the meaning of citizenship in our democracy. The Power of Citizenship is a challenge to all Americans."
—Richard Reeves, bestselling author of President Kennedy: Profile of Power

"Scott Reich offers unique and compelling insights into JFK's focus on public service. Collectively, we must embrace President Kennedy's message of good citizenship and work together to strengthen our country—especially for the next generation."
—Governor Martin O'Malley (D-MD)

"Reich's book should move the next generation of American leaders to heed President Kennedy's noble call to unite and achieve freedom for all."
—Senator Mark Udall (D-CO)

"The Power of Citizenship is an antidote to the pervasive cynicism and rancor that marks much of today's politics."
—Albert R. Hunt, Chairman of the John F. Kennedy Profile in Courage Award Committee

"Many of us of the Kennedy erahave struggled with how to explain to our children why the years 1961-1963 meant so much to us. Fortunately, Scott Reich has found a way to explain the inexplicable. I'm buying a copy for each of my daughters."
—David Shribman, Executive Editor, Pittsburgh Post-Gazette, Pulitzer Prize winner

"The Power of Citizenship helps illuminate the legacy of President Kennedy and his Administration. This book is an important contribution to a timely discussion of the meaning and importance of the Kennedy years."
—Kenneth R. Feinberg, Chairman of the John F. Kennedy Library Foundation's Board of Directors

"Any American interested in civic responsibility and the qualities of true leadership can find powerful insights in JFK's wisdom. These insights are aptly portrayed in Scott Reich's The Power of Citizenship, a must-read for anyone interested in the importance of duty and citizenship in these turbulent times."
—Christopher Kennedy Lawford, bestselling author of Recover to Live

"Reich's talent for capturing lessons from the past is matched here by his clarity of vision on how we can use those lessons to move our nation forward. "
—Governor Jack A. Markell (D-DE)

"Mr. Reich has done a service to a new generation of Americans to whom the torch of freedom—of which JFK so eloquently spoke—is now being passed. "
—Former Senator Alfonse D'Amato (R-NY)

"At a time when Americans have less faith in Washington to solve big problems, Scott Reich's book is a heartening reminder of President Kennedy's ability to inspire Americans to achieve great goals, ‘Not because they are easy, but because they are hard.'"
—Rep. Steve Israel (D-NY), Chairman of the Democratic Congressional Campaign Committee

"A The future of our nation has been passed to the millennial generation, and this book was written for them: it inspires, informs, and calls for the new action we need."
—Antonia Hernández, President & CEO, California Community Foundation

"A fresh look at JFK from a fresh voice of the new generation to which the torch is now being passed. Scott Reich has provided a fascinating and thoughtful perspective to those of us who were participants in the search for a New Frontier."
—Dan H. Fenn, Jr., Staff Assistant, President Kennedy, l961-1963, Founding Director, John F. Kennedy Library and Museum

"Reich calls on us to carry forward President Kennedy's legacy and overcome the challenges of our own time by meeting the responsibilities of citizenship."
—Adam Frankel, Former speechwriter to President Barack Obama

"Scott Reich provides the hope we need to overcome our current political impasse. In this eloquent and inspiring book, he identifies a core of idealism that ennobles politics and speaks to a new civic-minded generation."
—Michael A. Fitts, Dean and Bernard G. Segal Professor of Law, University of Pennsylvania Law School

"Reich's extraordinarily well-researched and well-written work should be of interest both to young Americans today and those who seek their support."
—Alvin S. Felzenberg, Ph.D., author of The Leaders We Deserved and a Few We Didn't: Rethinking the Presidential Rating Game

Scott D. Reich is a practicing attorney at Willkie Farr & Gallagher LLP in New York. In 2010, he was appointed by the Governor of New York to serve on the College Council of SUNY College at Old Westbury. He serves on the national board of the Union for Reform Judaism, the board of directors of the School for Language and Communication Development, and the board of trustees of Temple Sinai in Roslyn Heights, New York. He has done pro bono work for the Brooklyn Family Court and the New York Legal Assistance Group. Reich earned a B.A. in history and communication from the University of Pennsylvania and a J.D. from the University of Pennsylvania Law School, where he was president of his class.
Loading...
or support indie stores by buying on