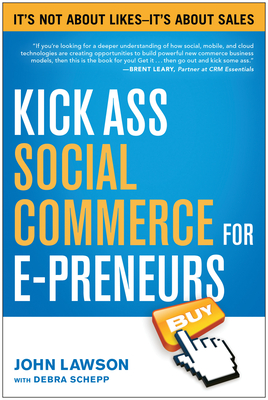 Ita's Not about Likes--Ita's about Sales

It's not about Likes--it's about sales. You're not alone. Almost all businesses are marketing online these days--everyone tweets, posts to social networks, and blogs. What you're doing now is not enough to make your business stand out. Forget what all the self-proclaimed "social media gurus" are telling you. Being active on social media and being successful in social commerce are not the same things. Simply getting a bunch of followers or Likes doesn't cut it anymore. In Kick Ass Social Commerce for E-Preneurs, award-winning digital media strategist John Lawson gives you a straight-shooting, no-holds-barred guide to social commerce. In other words, he shows you how to make money online using social media. One of the most-respected and listened-to voices in the worlds of e-commerce and small business, Lawson stands alone because he can actually back up his words. Lawson is a multi-platform PowerSeller, whose internet businesses have rung up millions of dollars in sales. In Kick Ass Social Commerce for E-Preneurs, Lawson and bestselling e-commerce author Debra Schepp take you step-by-step through: Creating a business plan using a simple, effective template, a proven blueprint for all stages of marketing--from start-up to empire
Employing the best social commerce strategy for Facebook, Twitter, LinkedIn, YouTube, and the hottest new social media sites
Building a thriving e-commerce business and keeping it vibrant and growing What are you waiting for? Read this book and start kicking social commerce ass.

John Lawson, founder of 3rd Power Outlet and ColderIce Media, started his first business while still in high school. Later in life, John discovered how profitable online selling could be, and his company 3PO was born. Just five years later, it brought in $1 million in sales. To date, 3PO's 300,000-plus transactions have garnered more than $25 million. Mixergy calls Lawson a "power seller." American Express hawks him as their "featured businessman." Startup Nation says he's the "savviest" in social media, and Small Biz Trends named him "Influencer of the Year." He is an award-winning social media strategist, spokesperson for several corporations, commercial television personality, and a sought-after keynote speaker and instructor. Debra Schepp is the author of 19 books, including How to Find a Job on LinkedIn, Facebook, Twitter, and Google+, eBay PowerSeller Secrets, and How to Make Money with YouTube. The Washington Post named her YouTube book among the top 10 business books of the year. She has been interviewed many times by national media, including LIFE Magazine, Forbes, and Entrepreneur magazine. She has also appeared on many radio shows and her work has been featured in publications such as Newsweek, The Chicago Tribune, Parade, and LIFE Magazine. As a former editor for McGraw-Hill and Gartner Group, she has been writing about living and working online since the 1980s.
or
Not Currently Available for Direct Purchase