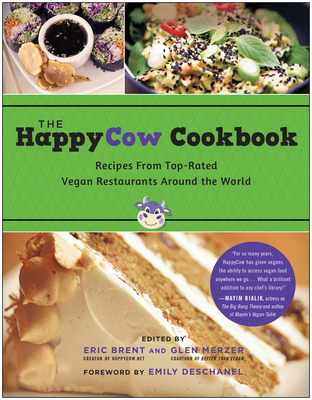 Recipes from Top-Rated Vegan Restaurants Around the World

Sample amazing vegan dishes from around the world--right in your own kitchen. HappyCow.com helps millions of people everywhere find delicious vegan and vegetarian cuisine across the globe through the site's extensive database of restaurants and reviews. Now, Eric Brent, creator of HappyCow, and Glen Merzer, coauthor of Better Than Vegan and Food Over Medicine, bring the HappyCow concept home with a collection of nutritious and delicious dishes from top-rated vegan restaurants around the world. Featuring recipes from many of the world's finest and most popular vegan restaurants, The HappyCow Cookbook shares the history and evolution of each restaurant, provides Q&As with the owners, and teaches you how to make some of their mouthwatering dishes. With entrees like Blackbird Pizzeria's Nacho Pizza, desserts such as Sublime Restaurant's Apple Crumble Pie a la Mode, and drinks such as El Piano's Granada Chai tea, HappyCow fans and newcomers alike will enjoy a selection of international gourmet vegan fare from the comfort of their own kitchens. The HappyCow Cookbook is a must-have guide for vegetarians, vegans, and those who simply want to experience some of the most delicious and healthy food on the planet.

Eric Brent, founder and director of HappyCow, first had the idea to create an online guide to vegan restaurants in the late 90s. As a 20-plus year vegan who has traveled to more than 50 countries, Brent knows firsthand how difficult it can be to find "safe" food upon arriving in a new city. More than a decade after launch, HappyCow.com garners about 850,000 visitors per month and helps vegans and vegetarians all over the world find great food nearby. Glen Merzer is coauthor with Del Sroufe of Better Than Vegan, with Pamela A. Popper, PhD, ND of Food Over Medicine, with Howard Lyman of Mad Cowboy, with Howard Lyman and Joanna Samorow-Merzer of No More Bull!, and with Chef AJ of Unprocessed. Merzer is also a playwright and screenwriter, having most recently completed a screenplay from Mad Cowboy. He has been a vegetarian for 40 years and a vegan for the last 20.
Loading...
or
Not Currently Available for Direct Purchase