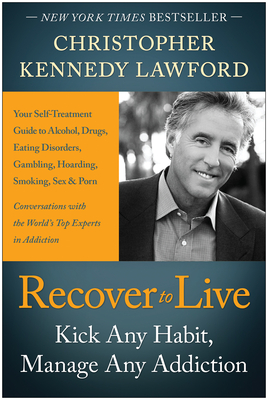 From New York Times bestselling author of Symptoms of Withdrawal and Moments of Clarity Christopher Kennedy Lawford comes a book that will save lives. For most of his early life, Christopher Kennedy Lawford battled life-threatening drug and alcohol addictions. Now in recovery for more than 25 years, he works to effect change and raise global awareness of addiction in nonprofit, private, and government circles, serving as the goodwill ambassador for drug dependence treatment and care for the United Nations. For the first time, Recover to Live brings together all of the most effective self-care treatments for the seven most toxic compulsions affecting every culture on the planet today--alcohol dependence, drug dependence, eating disorders, gambling, hoarding, smoking, sex, and porn. In Recover to Live, more than 100 of the world's top experts interviewed by Lawford share their research and wisdom on how to determine if your bad habit is becoming a dependency, what treatments will work best for you, how best to help yourself or a loved one recover from addiction, and how to lead a fulfilling and productive life in recovery.

Christopher Kennedy Lawford spent 20 years in the film and television industries as an actor, lawyer, executive and producer. He is the author of two New York Times bestselling books, Symptoms of Withdrawal (2005) and Moments of Clarity (2009). In recovery for more than 25 years from drug addiction, Lawford campaigns tirelessly on behalf of the recovery community in both the public and private sectors. He presently works with the United Nations, the Canadian Center on Substance Abuse, the White House Office on Drug Control Policy, and the World Health Organization. He also consults with Fortune 500 companies and numerous non-profit groups, speaking around the world on issues related to addiction, mental health, and Hepatitis C. In 2009, California Governor Arnold Schwarzenegger appointed Lawford to the California Public Health Advisory Committee. In 2011, Lawford was named Goodwill Ambassador for the United Nations Office on Drugs & Crime to promote activities supporting drug treatment, care and recovery. He also serves as national advocacy consultant for Caron Treatment Centers. Lawford holds a bachelor of arts from Tufts University, a juris doctor from Boston College Law School, and a masters certification in clinical psychology from Harvard Medical School where he held an academic appointment as a lecturer in psychiatry.
or
Not Currently Available for Direct Purchase