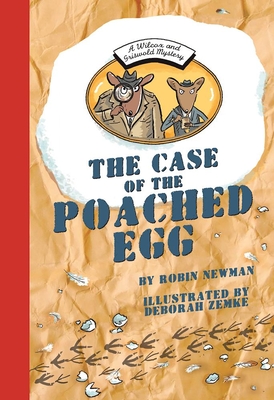 The Case of the Poached Egg (Hardcover)

When Penny goes missing from the nest, Wilcox and Griswold are called in to track her down. Was the egg stolen by a rival for The Most Round in the Spring Egg-stravaganza? Was she used in a carrot cake or scrambled by a hungry porker? Or was she held for a hefty corn ransom? Who took Penny and can the detectives find her before trouble hatches?

Robin Newman was a practicing attorney and legal editor but she now prefers to write about witches, mice, pigs, and peacocks. Her debut book, The Case of the Missing Carrot Cake, earned a starred review from Kirkus. Robin lives in New York. Learn more at robinnewmanbooks.com Deborah Zemke Deborah Zemke is the author/illustrator of more than twenty children's books, including the popular Doodles at Dinner books and placemats. She is a frequent contributor of Critter Crackups to Ranger Rick magazine and the designer of the font ITC ZemkeHand. For more information, visit deborahzemke.com
or
Buy Here
(This book is on backorder)
Copyright © 2020 American Booksellers Association