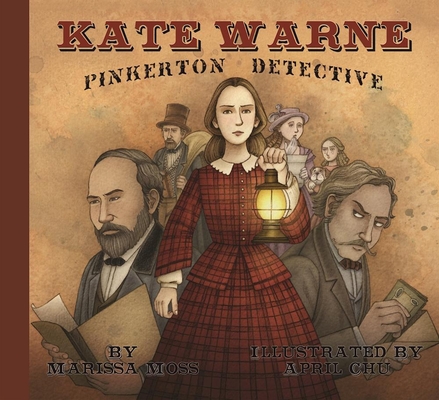 When Kate Warne applied for a job with the Pinkerton Agency, Pinkerton assumed she wanted to cook or clean, but he agreed to try her out as an agent. Assigned to a tough case with high stakes, Warne went undercover and not only found the stolen money, she got almost all of it returned. The Adams Express Case made the reputation of the fledgling Pinkerton Agency, turning it into the biggest, most prestigious detective company in the world. Warne went on to direct an entire women's division of detectives and Pinkerton relied on her for his hardest cases. A history well worth knowing

Marissa Moss: Marissa Moss has written more than 50 books for children. Her popular Amelia's Notebook series has sold millions of copies and been translated into five languages. April Chu: April Chu began her career as an architect with a degree from the University of California, Berkeley, but decided to return to her true passion of illustrating and storytelling. She lives and works in Oakland, California. Learn more about her at aprilchu.com.
Loading...
or
Not Currently Available for Direct Purchase