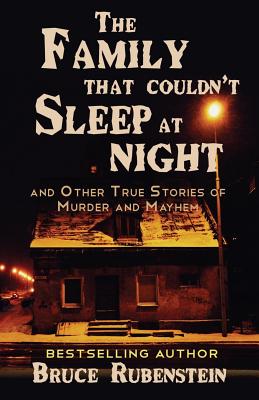 The Family That Couldn't Sleep at Night

and Other True Stories of Murder and Mayhem

This book is a compilation of true crime stories by prize-winning author Bruce Rubenstein, including "The Milwaukee Avenue Massacre", the Chicago Magazine article that resulted in the pardon of four men who were wrongfully convicted of murder. "Danny's Boat" is a chronicle of modern day piracy and murder involving a double-agent for the Mafia and the CIA. The book takes its title from the lead story, the saga of the O'Kasick gang, a band of armed robbers led by a sociopath who wanted to die in a shoot-out with the police. "Star Stalker" tells the tale of one of Hollywood's most dangerous stalkers, and "Last Train" goes inside the investigation of a string of hobo slayings, ultimately found to be the work of a serial killer.

Bruce Rubenstein has published hundreds of true crime stories in weeklies and monthly magazines. In 1991 he received the Chicago Bar Association's Herman Kogan Media Award for his Chicago Magazine article about the conviction of four Mexican immigrants for a quadruple homicide (dubbed "The Milwaukee Avenue Massacre" by the Sun Times) that they did not commit. They were serving the 9th year of their sentences of life without the possibility of parole when his article came out. As a result of his article the Governor of Illinois pardoned them. An anthology of his crime stories, titled "Greed Rage and Love Gone Wrong", was published by the University Of Minnesota Press in 2004. He won the Minnesota State Arts Council award for fiction in 1979, and published short stories in little magazines in the 70s and 80s. His story, "Smoke got In My eyes", written for the Akashic Books' anthology, Twin Cities Noir (2006), was nominated for the Shamus Award. His fiction has recently appeared in Ellery Queen's Mystery Magazine. His book about a notorious art theft titled "The Rockwell Heist" was published by Borealis in March 2013.
Loading...
or support indie stores by buying on