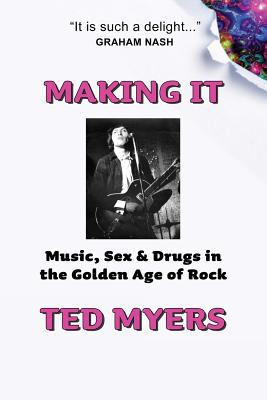 Music, Sex & Drugs in the Golden Age of Rock

For those too young to have lived it, or too high to remember it... Turn on, tune in, and ride along in the front car of the rollercoaster life of Ted Myers, as he chases his dreams of rock stardom through the '60s, '70s and '80s. Although he never quite makes it, he has many wonderful-and not-so-wonderful-adventures, and rubs shoulders with some of the true icons of folk, rock, and pop culture, including Bob Dylan, James Taylor, The Who, Procol Harum, Joni Mitchell, Graham Nash, Van Morrison, Steely Dan, Chevy Chase, Timothy Leary and even Elvira, Mistress of the Dark.

After twenty years trembling on the brink of rock stardom and fifteen years working at record companies, Ted Myers left the music business-or perhaps it was the other way around-and took a job as a copywriter at an advertising agency. This cemented his determination to make his mark as an author. Ted's nonfiction has appeared in: Working Musicians (Harper Collins), By the Time We Got to Woodstock: The Great Rock 'n' Roll Revolution of 1969 (Backbeat Books) and Popular Music and Society. His short stories have appeared online at Literally Stories, in print in the To Hull & Back Short Story Anthology 2016 and in Iconoclast magazine.
Loading...
or support indie stores by buying on