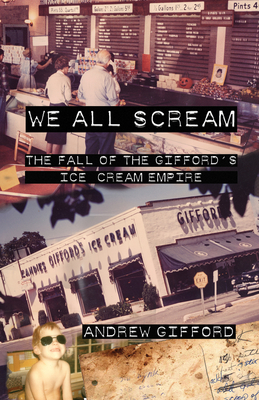 We All Scream (Paperback)

The Fall of the Gifford's Ice Cream Empire

For more than 70 years, Gifford’s Ice Cream and Candy Company was associated with nothing but pleasure for native Washingtonians and visitors to the nation’s capital. Few knew the dark truth… Behind the iconic business’s happy facade lay elaborate schemes, a crushing bankruptcy, two million dollars of missing cash, and a tragic suicide. As the last Gifford heir unfolds his story with remarkable immediacy and candor, he reveals the byzantine betrayals and intrigue rooted in the company from its modest beginnings—dark influences that would ultimately destroy the legendary Gifford business and its troubled founding family.

Born and raised in Washington, D.C., Andrew Gifford is the founder and director of the Santa Fe Writers Project, an indie press dedicated to craft writing. He is the grandson of the founder of Gifford’s Ice Cream.

Praise For We All Scream: The Fall of the Gifford's Ice Cream Empire…

“The most frightening book I’ve read about Washington since Newt Gingrich’s “Understanding Trump.” A Southern Gothic for the DC area. Loved it.”  —Mike Sacks, Vanity Fair

“The story Gifford tells is so much more than of the demise of an American ice cream empire. With its twists and mysteries, some unsolved to the end, it’s a riveting ride.” —Judith Beermann, The Georgetown Dish

“What begins as a behind-the-scenes scoop on the implosion of a beloved ice cream dynasty transforms into a harrowing tale of self discovery. Gifford writes with a scathing honesty that spares no one – himself least of all. Bittersweet and brilliantly wrought.” —Nevin Martell, Food writer and author of "Freak Show Without a Tent."

“Despite the sweetness of this family’s product, Gifford survived one of the most brutal and heartbreaking childhoods ever to be committed to the page. His ability to translate such sad memories into fine art is a mark of his resilience and testament to the strength of the human spirit.” —Cathy Alter, Author of "Crush"

“An embattled and fought-over ice cream empire gone bust, three generations of a deeply disturbed and troubled family, missing people and millions of dollars gone, and myriad unsolved mysteries. Andrew Gifford’s life is a kind of living ‘potboiler’ of a book, a riveting read. Gifford is a very gifted writer. I was mesmerized. Very highly recommended.” —Tim Bazzett, Author of "Booklover"

“Fascinating and horrifying, We All Scream is a well-crafted memoir that attempts to peel away the layers of a troubled family mired in decades of abuse, disappointment, and scandal. It is a son’s attempt to understand and reconstruct his parents, coming to the realization that, as with life, sometimes there are no answers. The book is at times a detective story, a coming-of-age tale, a personal memoir, and a therapeutic rage at fate. I will never eat ice cream at an ice cream parlor again without thinking of this book and how something so sweet can turn so very bitter.” —Tara Laskowski, Editor of Smokelong Quarterly, author of "Bystanders"

"This is a page turner from page one to the end. A well written, well paced story of intrigue, domestic horror, and how we never know what's truly happening behind the facades we humans construct for the rest of the world." —Karen Stefano, Author of What a Body Remembers
or support indie stores by buying on
Copyright © 2020 American Booksellers Association