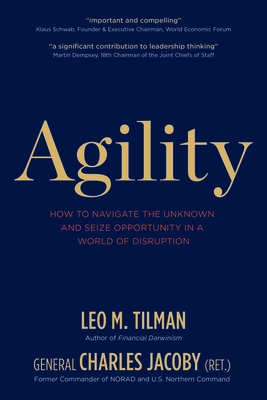 As the Fourth Industrial Revolution barrels forward and the pace of disruption accelerates, all organizations must operate with agility. But this urgent priority, now widely-accepted by senior leaders, presents a major challenge: In business, government, and warfare, agility is a buzzword. There is no common understanding of what it means, or of what it takes to be consistently agile. In this groundbreaking book, Leo Tilman and Charles Jacoby offer the first comprehensive assessment of the fundamental nature of organizational agility and then describe the essential leadership practices for achieving it. They show that agility is far superior to mere speed or adaptability. Pinpointing its distinctive features, they define agility as the ability to detect and assess changes in the competitive environment in real time and then take decisive action. They demonstrate that agility enables an organization to outmaneuver competitors by seizing opportunities; better defending against threats; and acting as a well-orchestrated collective of teams that are empowered to take disciplined initiative. Combining their personal experience of building and leading agile organizations, Tilman in the realm of business and finance and Jacoby in battlefield command and homeland security, they present a powerful approach to fostering agility up and down an organization, and out to its very edges. They show how to detect opportunities and threats by fighting for risk intelligence; how to pierce through complexity and unleash creativity by nurturing a culture of honesty and trust; how to meld top-down vision and planning with decentralized execution; and how to enhance strategy by recognizing organizations as dynamic portfolios of risk. In a world where leaders and their teams must brave the unknown and step confidently forward - or risk extinction - Agility provides a vital roadmap for seizing the unprecedented possibilities of the new age and dominating change instead of being dominated by it.

Leo M. Tilman is a leading expert on risk, strategy, and finance and a long-time advisor to companies, governments, and institutional investors around the world. Prior to founding his namesake strategic advisory firm, Tilman held senior roles at BlackRock and Bear Stearns and taught finance at Columbia University, his graduate and undergraduate alma mater. He is the author of three earlier books, including Financial Darwinism. Tilman helped shape the modern concept of risk intelligence and, in collaboration with U.S. government, created innovative models for public/private partnerships. He has been profiled as Business Visionary by Forbes. General Charles Jacoby (U.S. Army, Ret.) is a military leader whose career in uniform culminated as four-star Commander of the North American Aerospace Defense Command (NORAD) and U.S. Northern Command. Having led at all levels in peace and war, Jacoby headed the Federal military response to Hurricane Sandy and commanded the 135,000-member Multinational Corps during Operation Iraqi Freedom (2009-10). Previously, he served as the Director of Strategy, Plans, and Policy for the Joint Chiefs of Staff and as U.S. Military Representative to the UN. Jacoby is the Distinguished Chair of the Modern War Institute at the U.S. Military Academy at West Point, his undergraduate alma mater. He holds graduate degrees from the University of Michigan, the School of Advanced Military Studies, and the National War College.
Loading...
or support indie stores by buying on