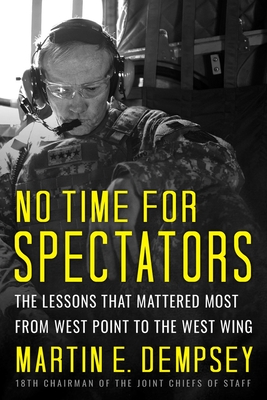 No Time for Spectators

Drawing upon a military career spanning more than four decades, General Martin Dempsey, former Chairman of the Joint Chiefs of Staff, examines the limits of loyalty, the necessity of sensible skepticism, and the value of responsible rebelliousness, and explains why we actually should sweat the small stuff.

No Time for Spectators takes readers behind the closed doors of the Situation Room, onto the battlefields of Iraq, and to the East German border at the height of the Cold War. It contends that relationships between leaders and followers--employers and employees, politicians and constituents, coaches and athletes, teachers and students--are most productive when based on certain key mutual expectations.

The book begins from the premise that life is not a spectator sport. Especially not today, especially not at a time when issues are so complex, information is so pervasive, scrutiny is so intense, and the stakes are so high.

No Time for Spectators may not be the answer to all of our problems, but it is a clarion call for those who are actually interested in solving them.

General Martin E. Dempsey, named one of the 100 most influential leaders in the world by Time magazine (2015), retired in October 2015 after 41 years of military service. He now teaches leadership and public policy as a Rubenstein Fellow at Duke University and serves as Chairman of USA Basketball. During his time in the Army, General Dempsey commanded combat units at every level including United States Central Command, where he was responsible for securing U.S. interests in the Middle East and South Asia. He served in both Operation Desert Storm and Operation Iraqi Freedom, accumulating 42 months in combat. Between 2011 and 2015 he served as the Chief of Staff of the U.S. Army and then as the Chairman of the Joint Chiefs of Staff. As Chairman of the Joint Chiefs of Staff, General Dempsey was the senior officer in the armed forces and the principal military adviser to the president of the United States. General Dempsey is a 1974 graduate of West Point and has master's degrees from Duke University in literature, from the Army Command & General Staff College in military science, and from the National War College in national security strategy. He also holds an honorary doctorate degree in law from the University of Notre Dame and is co-author of the bestselling leadership book Radical Inclusion: What the Post-9/11 World Should Have Taught Us About Leadership. In 2016 he was appointed by Queen Elizabeth II as a Knight of the British Empire. In 2019, the Association of the United States Army honored him with the George C. Marshall Award for public service. General Dempsey and his wife, Deanie, have been married for 43 years. They have three children and nine grandchildren.
Loading...
or support indie stores by buying on