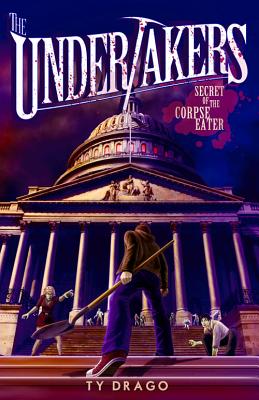 Secret of the Corpse Eater

The Corpses are up to something. U.S. Senator Lindsay Micha has been kidnapped and replaced with a “dead” ringer—the sister to Lilith Cavanaugh, the Queen of the Dead. Now, Will Ritter must go undercover in our nation’s capitol to ferret out the truth and try to stop this ambitious deader. But his mission becomes even more dangerous when he learns of a mysterious 10-legged monster that prowls the halls of the Capitol Building—a lethal monster with a taste for Corpse flesh. Focusing more on scares and suspense than gore, the latest installment in this unforgettable zombie series will satisfy cravings in the hungriest of horror-minded young readers.

Praise For The Undertakers: Secret of the Corpse Eater…

"The author hardly sets a foot or a word wrong."  —Publishers Weekly

"With elements reminiscent of works by Rowling, Riordan, and Stine, Drago unveils the plot through many short chapters, calling into action a cast of distinctive characters with authentic voices and behaviors . . . Will's breathless adventures as he faces his destiny of becoming an Undertaker are thoughtful and exciting, and the descriptions of decaying flesh will likely both disgust and delight readers . . . who will be clamoring for the continuation of the story."  —Booklist

Ty Drago is a writer whose short fiction has appeared in numerous publications and whose articles have appeared in Writers Digest. He is the author of Phobos, The Undertakers: Queen of the Dead, and The Undertakers: Rise of the Corpses. He lives in Cherry Hill, New Jersey.