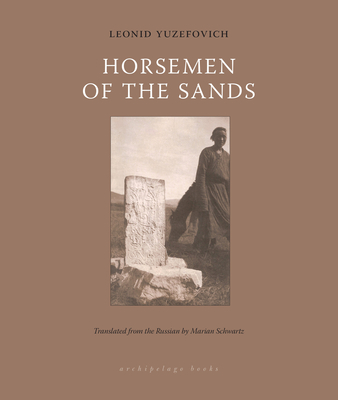 Horsemen of the Sands (Paperback)

Two novellas from one of the most exciting writers in contemporary Russia.

Horsemen of the Sands gathers two novellas by Leonid Yuzefovich: "Horsemen of the Sands" and "The Storm." The former tells the true story of R.F. Ungern-Shternberg, also known as the "Mad Baltic Baron," a military adventurer whose intense fascination with the East drove him to seize control of Mongolia during the chaos of the Russian Civil War. "The Storm" centers on an unexpected emotional crisis that grips a Russian elementary school on an otherwise regular day, unveiling the vexed emotional bonds and shared history that knit together its community of students, teachers, parents, and staff.

Leonid Yuzefovich, a historian and writer, was born in Moscow in 1947 and spent his childhood and adolescence in the Urals. After graduating from university in Perm, he served as an officer in the Soviet Army in the Trans-Baikal region from 1970 to 1972 and for many years taught history in high school and college. His detective novel trilogy about a real-life nineteenth-century police inspector, Ivan Putilin, has been filmed several times and been translated into various languages. Yuzefovich was awarded the Big Book Prize for his novel Cranes and Pygmies in 2009, and has been shortlisted twice for the Russian Booker Prize. About the translator: Marian Schwartz has translated over sixty volumes of Russian classic and contemporary fiction, history, biography, criticism, and fine art. She is the principal English translator of the works of Nina Berberova and translated the New York Times' bestseller The Last Tsar, by Edvard Radzinsky, as well as classics by Mikhail Bulgakov, Ivan Goncharov, Yuri Olesha, and Mikhail Lermontov, and Leo Tolstoy. She is the recipient of two National Endowment for the Arts translation fellowships and the 2014 Read Russia Prize for Best Translation of Contemporary Russian Literature and is a past president of the American Literary Translators Association.

Praise For Horsemen of the Sands…

"This impressive volume . . . Shot through with a mythic and cipherlike style, Yuzefovich’s novellas are cogent depictions of faith, obsession, power, and the ties that bind." — Publishers Weekly

"History and human drama collide in Leonid Yuzefovich’s Horsemen of the Sands, a wonderful tangle of relationships, religions, and realism...The prose adroitly bears both an ethereal and a concrete quality...culminating in a fascinating meditation on trickery and the power of suggestion." — Meagan Logsdon, Foreword Reviews

"[The Storm] asks readers to go beneath the surface, while [Horsemen of the Sands] opens up an unfamiliar world and invites us to think about the stories we tell. One can only hope that more of Yuzefovich’s work makes its way into English with all the speed and determination of the horsemen he chronicles." — Yelena Furman, Los Angeles Review of Books

"Without discarding realism, this finely counterpointed tale suggests that magic works only if one believes in it. The same can be said of fiction, and Leonid Yuzefovich’s writing certainly has what it takes to earn our trust." — Anna Aslanyan, The Times Literary Supplement

"Marian Schwartz delivers these very Russian stories in pitch-perfect English" — Asian Review of Books, a Best Book of the Year

"These are fitting novellas to bring to an American public...they eschew the Russian penchant for long philosophical monologues or dialogues that create philosophical debate and meaning in a work, and instead Yuzefovich opts for the more “American” style of communicating meaning through events themselves...The internal consistency of the novellas is a testament to the craft of the writer, and also to Schwartz’s translation." — Ryan K. Strader, Cleaver Magazine

"Yuzefovich is an author who knows the value of words and is firmly convinced that there is virtue in simplicity...this is high Russian prose written in superb language, very precise and lucid."--Lev Danilkin, Afisha (Russia)

"Yuzefovich is one of the undoubted and undisputed greats of present-day Russian literature."--Konstantin Milchin, TASS (Russia)

"Yuzefovich's chief merit as a writer may be his astoundingly warm, tender, and at the same time humorous attitude toward his heroes. This is seen particularly well in 'The Storm'...The heroes of "The Storm" are bathed in the warmth of the author's gaze and protected by the author's love."--Marina Abasheva, Fililog (Russia)

"Yuzefovich often takes us to Mongolia. When he writes about that country, he achieves the impossible: he knows and loves it so well and describes it so realistically that he ends up creating his own special Mongolia, a 'Mongolia of the spirit.'"--Dmitry Kosyrev, RIA Novosti (Russia)

"Accuracy and attention to real characters are a distinguishing trait of Yuzefovich's books. His historical imagination has no truck with lies...Beginning with his first success, Autocrat of the Desert, about Baron Ungern, which came out in 1993, he writes about real heroes in real circumstances."--The Village (Russia)