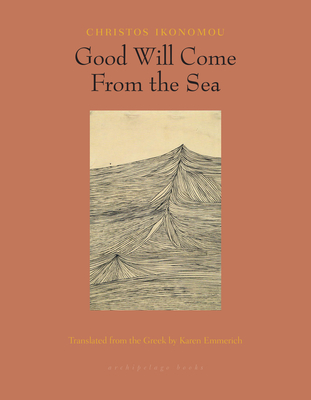 Good Will Come From the Sea

A collection of blistering, darkly humorous stories that upend the idyllic image of the Greek holiday island.

Seeking to escape the paralyzing effects of the Greek economic crisis, a group of Athenian friends move to an Aegean island in the hopes of starting over. Viewed with suspicion and disdain by the locals, they soon find themselves enmeshed in the same vicious cycle of money, power, and violence they thought they had left behind.

Praise For Good Will Come From the Sea…

"The first story, 'I’ll Swallow Your Dreams,' from Christos Ikonomou’s Good Will Come From the Sea—a dystopian collection about Greece’s economic devastation—blew my head off with its tender and awful brutality."— Maggie Nelson, in The New York Times

Ikonomou "approaches the grimness and desperation of his characters’ lives with lightness and humor, in an idiomatic Greek seamlessly translated by Karen Emmerich . . . 'Good Will Come From the Sea' follows Ikonomou’s 'Something Will Happen, You’ll See,' another story collection about the lives of working-class Athenians, which won a prestigious national award. Together, these books make a persuasive case for regarding Ikonomou as Greece’s most original and perceptive chronicler of his country’s fears and yearnings." — Fani Papageorgiou, The New York Times


"All four of the tales here examine themes of exploitation, class conflict, and deep discontent, suggesting that life in 21st-century Greece is far more dystopian than idyllic. A grim set of stories in which characters feel imprisoned and current social conditions don't allow much room for hope." — Kirkus Reviews

"The impressive diversity of voices adds depth to the bleakness of these lives trapped on the brink of survival. This powerful collection will move readers with its focus on despairing people battered by forces beyond their control." — Publishers Weekly

"These stories are tumultuous journeys from despair to hope and back to despair, masterfully rendered by Ikonomou... Absent are any woodenness or awkwardness, testament to the quality of the translation by Karen Emmerich, a veteran translator of contemporary Greek fiction who has rendered the book with such nuance that it has the nimbleness of something originally written in English." – Niko Maragos, Los Angeles Review of Books

"(Ikonomou) delivers stories of the marginalized, the underdogs, weaving together a provincial cosmos from a panoply of nearly palpable voices, finally insisting in his fiction on “the indestructibility of man” ... Ikonomou lets loose astounding images ... They are protests against the loss of story, and reach into the primal place in our souls." — Leeore Schnairsohn, Los Angeles Review of Books

"About halfway through Christos Ikonomou’s Good Will Come from the Sea, as the titular story wound to an end, I realized I hadn’t been breathing. My eyes were trained on the text, moving determinedly down the page, but my breath had caught somewhere between my lungs and the roof of my mouth...Karen Emmerich’s faultless translation is populated by people fighting to maintain their livelihoods and dignity under circumstances beyond their small, human control. To say this is a book about the crisis would be too limiting. Rather, it is a book about people staring foggily into a future difficult to discern while trying to navigate an unmarked present." — Julia Sanches, in Three Percent

"Ikonomou masterfully takes readers inside narrow points of view to reveal both their biases and the deeply felt motives behind those biases. The result is a highly empathetic and often darkly funny portrait of a country at war with itself. ... Without denying or belittling his country’s pain, Ikonomou writes of a Greece where the sun still rises." — Ellie Robins, BOMB

"Ikonomou's style veers between flights of incantatory lyricism and volleys of funny lines and tough street talk. Again one wants to praise Karen Emmerich's translation . . . The rhapsodic lyricism and dry gallows humor, the speed and nimbleness of the tonal shifts, drew me in to these books. The sympathy of Ikonomou's characterization—the humanity he captures on the page—made me keep reading." — Francine Prose, Harper's Magazine

"In this collection, some characters are hardened by their experiences, some find courage, and some lose themselves in delusions. Each of their stories is gripping from the first to the last." — Christopher Byrd, Vulture

"The stories in Good Will Come from the Sea explode off the page then dig beneath the skin. Irreverent yet unabashedly vulnerable, surreal yet grounded in the most visceral emotions, Ikonomou has given us characters that leap up and take hold and never quite let us go. This book is spectacular." -- Maaza Mengiste


Praise for Christos Ikonomou's Something Will Happen, You'll See:

"In much the way John Steinbeck laid open the migrant worker culture of mid-century California, Ikonomou exposes us to the realities of Greek poverty, the bitter taste of politics, and the generational divide. These stories are pitch-perfect, with sullen anger, wit, sharp humor, and tragicomedy captured in sharply crafted scenes that linger in the memory."--Los Angeles Review of Books

"A gripping collection of short stories... In Ikonomou's concrete streets, the rain is always looming, the politicians' slogans are ignored, and the police remain a violent, threatening presence offstage. Yet even at the edge of destitution, his men and women act for themselves, trying to preserve what little solidarity remains in a deeply atomized society, and in one way or another finding their own voice. There is faith here, deep faith--though little or none in those who habitually ask for it."--Mark Mazower, The Nation

"Something Will Happen is a heart-breaking and essential portrait of Greece's modern despair, and while there are hopeful moments scattered throughout, the ones that ring truest are apocalyptic."--The Paris Review

"The seamlessness with which the past breaches the surface of the present is astounding. Reading this book makes you read into yourself."--Zyzzyva

"Ikonomou's Something Will Happen, You'll See depicts many lives, of all ages, that have been blighted by financial hardship. The book stands with Rafael Chirbes's On the Edge as one of the remarkable literary interpretations of the recent global downturn."--Christopher Byrd, Barnes and Noble Review

Christos Ikonomou was born in Athens in 1970. He has published three collections of short stories, The Woman on the Rails (2003), Something Will Happen, You'll See (Greek edition 2010; Archipelago Books, 2016), and Good Will Come From the Sea (Greek edition 2014; Archipelago Books 2018). Something Will Happen, You'll See won Greece's prestigious Best Short-Story Collection State Award and became the most reviewed Greek book of 2011. His work has been translated into six languages. Italy's La Repubblica has called him "the Greek Faulkner." About the translator: Karen Emmerich's translations from the Greek include books by Margarita Karapanou, Amanda Michalopoulou, Sophia Nikolaidou, Ersi Sotiropoulos, and Vassilis Vassilikos. Her translation of Miltos Sachtouris's Poems (1941-1971) for Archipelago was nominated for a National Book Critics Circle Award in Poetry and her translation of Yannis Ritsos's Diaries of Exile with Edmund Keeley won the 2014 PEN Literary Award. She is the translator of Christos Ikonomou's Something Will Happen, You'll See (Archipelago Books 2016). She teaches in the Comparative Literature Department at Princeton University.
Loading...
or
Not Currently Available for Direct Purchase