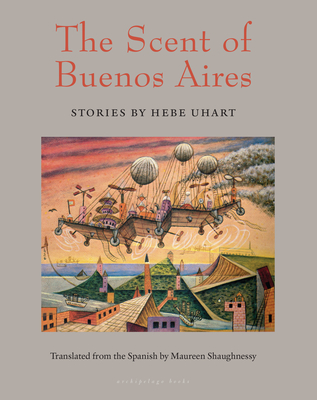 The Scent of Buenos Aires

“Seemingly naïve but tremendously sharp, Hebe Uhart’s vision is one that could belong to a child, but a child who has up her sleeve the reflective tools of an adult.”  — Alejandra Costamagna

“These stories rarely adhere to conventional plots, but as mood pieces they're effective glimpses into the peculiarities of Uhart's characters, who crave order but usually concede that the world's default mode is disarray.”  — Kirkus Reviews

The Scent of Buenos Aires is the first collection of Uhart’s to be published in English, drawing together her best vignettes of quotidian life, stories that sneak up on you. Refreshingly approachable, they are punctuated by street talk and saturated with a cryptic wit that recalls Lydia Davis.

In The Scent of Buenos Aires, Uhart renders moments at the zoo, the hair salon, or a homeowners association meeting with delightfully eccentric insight. These stories cast an unusual, intimate light on the inner lives of plants, animals, and humans, magnifying the minute, everyday quirks of Argentina’s small towns: a cat curls around his owner to humor him, a classroom of children sway like trees when their teacher turns her back. Smiling to herself, Uhart reveals the infinite ways we show ourselves to one another.

Praise For The Scent of Buenos Aires: Stories by Hebe Uhart…

Longlisted for the PEN Translation Prize

"These stories rarely adhere to conventional plots, but as mood pieces they're effective glimpses into the peculiarities of Uhart's characters, who crave order but usually concede that the world's default mode is disarray...A welcome (if, alas, posthumous) introduction to a sui generis writer." — Kirkus Reviews

"There’s a wonderfully off-kilter humanity to Uhart’s writing that readers are sure to respond to. This collection feels like a deserved celebration of a writer’s career." — Publishers Weekly

"A remarkable introduction to one of the unsung women writers of Argentine letters." — Library Journal

"Immersing oneself in this collection – her first book to be translated into English, by Maureen Shaughnessy – is indeed like travelling, as we visit one character’s world and then another’s, inhabiting the revealing mundanities of each life. Little happens in terms of plot; rather, each story is an understated exercise in conjuring a whole existence through a revealing thought or gesture . . . the reader returns from her travels feeling refreshingly unbalanced." – Emily Rhodes, The Guardian

"The Scent of Buenos Aires is concerned with the social and communal, but with a wink and a nudge toward the ridiculous habits of people. Uhart suspects, loves, and laughs at each of her characters in equal measure because she knows that, when it comes to the array of human emotion and motivation, “one person’s freedom ends where another’s begins.”" — Foreword Reviews

"It is clear to me why Uhart is so loved by many Argentine readers . . . Reading her fiction highlights the ways in which much of the discourse about Argentina and Argentine literature . . . steps over Argentines and the place itself in an effort to get somewhere else. Uhart’s quiet insistence upon seeing and hearing the people around her affirms a place and people real and worthwhile in and of themselves." — The Common

“Paul Klee famously described drawing as taking a line for a walk and the stories of Hebe Uhart share that spirit, that magic. Deceptively simple, also philosophical, Uhart's work is brilliant and companionable. The Scent of Buenos Aires is translated from the Spanish by Maureen Shaughnessy, and Animals, translated by Robert Croll, is out in April next year.” -- Rivka Galchen, author of Atmospheric Disturbances, in Restless Books

"In the first half of the book, we find stories revolving around the female body and expounding on domestic themes while in the latter half of the book, we encounter tales on politics, activism, and the role of Indian women in these areas...Ambai infuses a deep sense of reality in her stories by making the worlds of these women rich in sensory details - one can almost smell and taste and feel the environment of the characters." — Cleveland Review of Books

"The stories... are acutely observed, but as if by a foreigner or a newcomer with no previous experience of what is being described; they’re told with a deceptive simplicity that draws the reader into deep labyrinths of everyday life." —Esther Allen, Words Without Borders

"(Uhart's stories) steadily, unobtrusively oxygenate the world around them ... Uhart helped shape a generation of writers in Argentina as both a teacher and a writer, her influence both diffuse and impossible to ignore ... Shaughnessy has, in turn, helped us hear English as Uhart might have heard it, displaying a remarkable prowess ... It is because we can now hold these stories in our hands that her insights serve as a second set of eyes, her perspective shaping ours as we look at the world around us." — Music & Literature

"Cultivating a sense of respect for (and kinship with) other levels of sentience, Uhart’s manner of acknowledging the interconnectedness of consciousness allows us to see Buenos Aires—any place, really—as its own organism, composed of endless living, breathing parts. Further, Uhart takes us into the internal worlds of these beings, shining light on both the typical and extraordinary ways we perceive our environment and ourselves." — Asymptote

"One of Argentina's finest and most beloved authors, Uhart has managed to escape the attention of a wider global readership for some time ... Uhart's stories are concise and filled with both dry and conversational wit and flashes of poignant insight. Uhart is a slice-of-life writer, and the breadth of those slices is almost as impressive as their deceptive depth." — Thrillist

"Uhart is concerned not with creating a mythology but with examining humanity, at all ages, in many social classes, jobs and towns. Short stories in translation offer insight into language: its meaning and pronunciation. [The Scent of Buenos Aires] explores means of communication as they amplify female voices and perspectives." — The London Magazine

"These witty and sometimes cryptic tales are mostly set in Buenos Aires by a writer’s writer who has an acute eye for the uncanny and the mundane...(Uhart) is one of the most singular and exiting female voices of recent decades in Latin America. Her unique body of work and her unforgettable voice lives on in many of today’s younger generation of writers emerging on the continent." — Morning Star

"Hebe approached her subjects from an astonished and oblique angle that, at first, might appear naive. Not so. Her short stories feature protagonists rarely seen in Argentine literature [...] Always rescuing the voices that no one pays attention to, yet not at all in a pompous way, for, if there was one thing that Hebe Uhart never wanted to do, it was to fall into the common position of giving voice to the voiceless and other slogans that she would consider idiotic." — from "Perfect Pitch" by Mariana Enriquez, author of Things We Lost in the Fire, in Página/12

"I do not like authors who are too satisfied. The best tradition of Argentinean literature was built in these vacillations: the uncertain narrator of Borges or of Hebe Uhart, that idea that meaning is always being constructed, and that opposes other traditions in which the narrator is sure of the order of things." - Ricardo Piglia

"[In Uhart's writing] from simplicity one penetrates depths and labyrinths where you can only advance if you participate in the magic of that new world...It neither clarifies nor completes a known reality. It reveals, or rather, it is a unique, distinct reality." - Haroldo Conti

"Hebe is the best and the strangest. After decades of writing and publishing narrations, Hebe became an author that dominated a central genre for the Argentine tradition: the short story. However, this has the geographic particularity of being transnational: when we think about stories in Argentina we think about literature created in the Río de la Plata, between Argentina and Uruguay. And that was one of the strongest nuclei in Hebe's literary identity, by which it was not a national but an inherently Río de la Plata literature." - Inés Acevedo

"Hebe's texts (her fiction as well as her chronicles) played with the world in a manner that didn't fully coincide with Victor Shklovski's definition of defamiliarization, that disposition of finding the strange and the unfamiliar within the quotidian. This is perhaps because the quotidian perception of Hebe Uhart in the world was, in itself, lacking automatization from the beginning, being always full of amazement, of a cultivated sense of bewilderment. That register was then translated to her texts through a writing that was ingeniously natural, with a simplicity that was only simulated." - Martin Kohan

"The world of Hebe Uhart, which so intensely appears in her stories, is abundant, collective and absolutely personal ... She as given Argentine Literature countless unforgettable, exciting characters that establish, when talking or acting, when having certain feelings over others, a way of existing, of resisting, of withstanding." - Elvio E. Gandolfo

"I normally tear through books at a blistering pace but not this one. I spent a week lingering over each of the 25 short stories in The Scent of Buenos Aires...I can see why Hebe Uhart is a beloved Argentine author. She knew women. Uhart had a gift for writing stories about the inner life of crazy, eccentric, and curious women." — Meilee Anderson, She Explores Life (blog)

"Offbeat, colloquial and witty . . . [The Scent of Buenos Aires] creates magic from the mundanities of life in Argentina . . . There is something of Stevie Smith in her style, a knack for turning sophomoric ore — fairy tales, puns, encounters with animals — into literary gold . . . the economy of her writing both disguises and concentrates its psychic wallop."  — Valerie L. Popp, Wasafiri

Born in 1936 in the outskirts of Buenos Aires, Hebe Uhart is one of Argentina’s most celebrated modern writers. She published two novels, Camilo asciende (1987) and Mudanzas (1995), but is better known for her short stories, where she explores the lives of ordinary characters in small Argentine towns. Her Collected Stories won the Buenos Aires Book Fair Prize (2010), and she received Argentina's National Endowment of the Arts Prize (2015) for her overall oeuvre, as well as the Manuel Rojas Ibero-American Narrative Prize (2017).

Maureen Shaughnessy’s translations from Spanish include works by Hebe Uhart, Nora Lange, Margarita García Robayo, and Luis Nuño. She has also translated Guadalupe Urbina’s Maya folktales, as well as several Cañari legends. Shaughnessy’s translations have been published by Words Without Borders, World Literature Today, The Brooklyn Rail, and Asymptote. She lives in Bariloche, Argentina.
Loading...
or
Not Currently Available for Direct Purchase