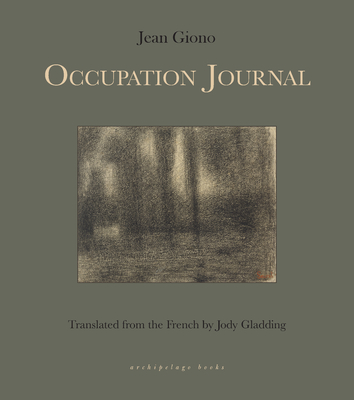 A captivating literary and historical record, Jean Giono's Occupation Journal offers a glimpse into life in collaborationist France during the Second World War, as seen through the eyes and thoughts of one of France's greatest and most independent writers.

Written during the years of France's occupation by the Nazis, Jean Giono's Occupation Journal reveals the inner workings of one of France's great literary minds during one of the country's darkest hours. A renowned writer and committed pacifist throughout the 1930s--a conviction that resulted in his imprisonment before and after the Occupation--Giono spent the war in the village of Contadour in Provence, where he wrote, corresponded with other writers, and cared for his consumptive daughter. This journal records his musings on art and literature, his observations of life, his interactions with the machinery of the collaborationist Vichy regime, as well as his forceful political convictions. Giono recounts the details of his life with fierce independence of thought and novelistic attention to character and dialogue. Occupation Journal is a fascinating historical document as well as a unique window into one of French literature's most voracious and critical minds.

Jean Giono (1895-1970) was a novelist, essayist, and playwright, and one of the most prolific and respected French writers of the 20th Century. Born to a modest family in Provence, he was conscripted to the French Army in the First World War, and the horrors he experienced cemented his lifelong commitment to pacifism. His first major literary success came with Colline (1929) which won him the Prix Brentano. He continued to publish novels and political writings during the 1930s, and his strict pacifism led him to be briefly imprisoned for collaboration before and after the Nazi occupation of France. After the Second World War Giono continued to gain success as a novelist, and many of his books were adapted into films. He received the Prince Rainier of Monaco Prize for lifetime achievement in 1953, was elected to the Academie Goncourt in 1954, and became a member of the Literary Council of Monaco in 1963. About the translator: Jody Gladding is a translator and poet. She has published four poetry collections, Translations from Bark Beetle, Rooms and Their Airs, and Stone Crop, which was the winner of the 1992 Yale Series of Younger Poets competition. Her translations from the French include Jean Giono's Serpent of Stars and Pierre Michon's The Eleven.

"For Giono, literature and reality overlap the way that waves sweep over the shore, one ceaselessly refreshing the other and, in certain wondrous moments, giving it a glassy clearness."--Ryu Spaeth, The New Republic

"Giono's voice is the voice of the realist; his accents are the accents of simplicity, power and a passionate feeling for a land and a people that he must love as well as understand."--The New York Times

"There are certain books you feel you’ve needed without even knowing whether they exist; and when finally you read such a book, it becomes indispensable to comprehending the most haunting insistences of human experience. I’m speaking here of Occupation Journal by Jean Giono, brilliantly translated by Jody Gladding. This journal is full of harrowing wartime incident, an almost desperate reliance on literature, the severest lyricism Giono needed to chronicle thinking and feeling deeply in a world gone mad." — Howard Norman
or
Buy Here
(This book is on backorder)
Copyright © 2020 American Booksellers Association