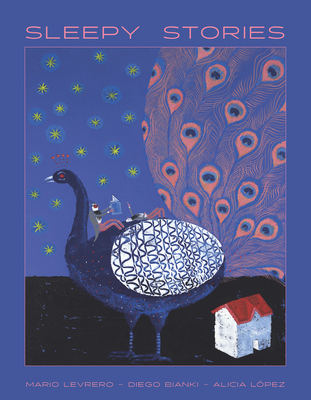 A buoyant account of the nightly tug-of-war between a sleepy father and his son, and the richly imaginative "sleepy stories" they create

Each story told in Sleepy Stories drifts deeper into a beguiling dream world, telling of an elastic gentleman who stretches his body across town to effortlessly slip into bed, or of another sleepy young man who curls inside an upside-down umbrella to take a snooze. In Diego Bianki's magical universe, the waking world is made small (a French press and a red top hat shrink before our eyes), while the dream world Levrero and his son Nicolás build together (a land of sly frogs, giant apes, and smiling squids) waltzes across the page. On the last of Bianki's whimsical illustrations, Nicolás holds the book over his father's nodding head and says, "Another." This is a book to giggle with and curl up with, to take on every sleepy adventure.

"Young Nicolás has a voracious appetite for stories and no sympathy for a profoundly sleepy storyteller . . . A storyteller identified only as “Me” spins the yarns to Nicolás, often yawning and nodding off midstory . . . Young readers and their perplexed grown-ups will want to read and reread again and again. Wildly imaginative, surreal, beautiful…in a word, this Argentine import is fabulous." - Kirkus Reviews (starred review)

"A nose-tap to every grownup who’s ever been wheedled into reading “just one more!” bedtime story, this is a funny collection whose reluctant narrator warns that his stories are rooted in his severe sleepiness. In them, similarly weary characters curl up in overturned umbrellas, stretch themselves across their houses, and are tossed between monkeys, but they don’t resist: all they want is to slumber. The book’s bold illustrations match the dream-like details of the narrator’s lethargic trip through parent-child nighttime struggles." --MICHELLE ANNE SCHINGLER, Foreword Reviews

"Bianki presents a world steeped in color: seas of deep crimson, teeming with incarnadine fish, and skies alike of red, but also of indigo, lavender, pink, and warm brown, and always crowded with flocking birds, branches, vines, or stars of lime or coral color . . . Crowded without being cluttered, with animals and sundry mysterious and surprising details, Bianki’s paintings will enchant readers young and old, and they warrant repeated viewing." - Youth Services Book Reviews

"The artwork in this one is quite original and will offer young readers something beyond the 'normal' picture book illustrations they're usually exposed to . . . The unique illustrations allow the quirkiness of 'Me's' tales to come across with an original and strange flair." --Bookworm for Kids

"I love the stories that Nicolás's dad tells him. They are beautifully crafted, goofy, filled with lots of creativity, and cuteness. You just can't help yourself but laugh when the dad tells these stories." -- Olga Popivker, Stylish Modern Motherhood

"The stories were quite quirky and the illustrations were surreal, and I loved the whole thing!" ––Unleashing Readers

"You know those times when you are too tired to think straight, but your kiddo wants a story? That's the premise of Sleepy Stories. The father pleads exhaustion, but the child says that any story, even a sleepy story, would be fine . . . It's short, sweet, and totally relatable . . . Sleepy Stories is lovely and soothing, and it elicits chuckles from this adult reader." - Victoria DiMassa, Glass of Wine Glass of Milk

Mario Levrero was born in Montevideo, Uruguay, in 1940 and died in 2004. Levrero was a photographer, bookseller, comics scriptwriter, humorist, crossword author, and creator of brain games. In his later years, he directed a literary workshop. His novel Empty Words was published in English in 2019.

Diego Bianki is an illustrator, editor, and designer from Argentina. He is co-founder and artistic director of Pequeño Editor, a collective publishing project based in Buenos Aires that specializes in illustrated books. For his illustrations, he has won the 2013 Bologna New Horizons Prize for the book Diccionario para armar, the Konex Career Illustration Prize, and the 2012 Illustration Prize from the Venezuelan Banco del Libro for the book Candombe fiebre de carnaval. He has also won two White Ravens, awarded by Munich's Internationale Jugendbibliothek.

Alicia López is a translator and sculptor. She grew up in San José, Costa Rica and currently lives in California.
Loading...
or support indie stores by buying on