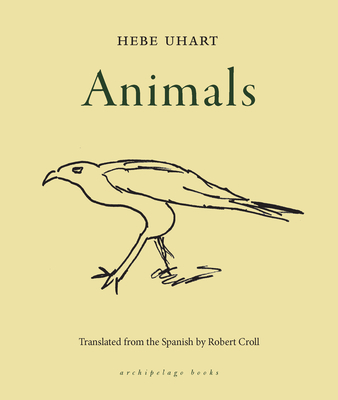 From the winner of Argentina's National Endowment of the Arts Prize and the Manuel Rojas Ibero-American Narrative Prize comes this series of reflections on critters and their natural or not-so-natural habitats.

Hebe Uhart's Animals tells of piglets that snack on crackers, parrots that rehearse their words at night, southern screamers that lurk at the front door of a decrepit aunt's house, and, of course, human animals, whose presence is treated with the same inquisitive sharpness and sweetness that marks all of Uhart's work. Animals is a joyous reordering of attention towards the beings with whom we share the planet. In prose that tracks the goings on of creatures who care little what we do or say, a refreshing humility emerges, and with it a newfound pleasure in the everyday. Watching a whistling heron, Uhart writes, "that rebellious crest gives it a lunatic air." Birds in the park and dogs in the street will hold a different interest after reading Uhart's blissful foray into playful zoology.

"Uhart, who died in 2018, was an utter master of the gentle observation. Her work combines unsentimental affection with endless curiosity about the details of everyday life . . . Animals is at once tender, bemused, informative, and deeply fun . . . It asks, through sweet, respectful attention, how we might best relate to animals; how we humans, so accustomed to seeing ourselves as nature's rulers, might adjust our attitudes." -- Lily Meyer, NPR.org

"The writer disappears and the reader becomes the observer, dropping in on a bench at the city zoo, dipping into Walden, and conversing with retired ornithologists and Polish playwrights. With each vignette lasting not more than five pages (not to mention the pleasurable shape and feel typical of Archipelogo’s titles) it’s the ideal book to just carry around and enjoy while say, sitting in a waiting room, or riding the bus, or waiting for the oven timer."  -- Dan Carlisle, Literary Hub

"Less natural history and more wondrous secret kingdom, this book gestures to something more tender, more surprising, a place where humans glimpse animals eye to eye—but the viewing is in reverse, as if we are being observed,not the other way around."-- Kerri Arsenault, Orion

"For Hebe Uhart, "looking" was the most authentic way of writing, as if her arrested and thoughtful gaze over characters was carried into the words that formed their stories." -- Edwin Madrid
"[Uhart] is one of the most singular and exciting female voices of recent decades in Latin America. Her unique body of work and her unforgettable voice lives on in many of today's younger generation of writers emerging on the continent."-- Morning Star

"Her short stories and vignettes from daily life shimmer with truth...Fans of writers from Alice Munro to William Trevor will find Uhart's work, whenever it appears in English, a delight." -- Samuel Rutter, The Arkansas International

"Hebe Uhart's characters are made of an almost palpable material. They are alive, and they seem to emerge from the page to tell us, 'This one here is me, that one over there could be you.' How we move, how we walk, how we keep quiet: that is what Uhart observes in each of us. But also how we pause, how we sneeze, what onomatopoeias we use, how our being is revealed through everyday gestures that at times can contradict the ideas we claim to hold. It's through these minute observations, and her repudiation of generalities, that the writer unfurls her tentacles to construct her characters."-- Alejandra Costamagna, The Paris Review

"Hebe Uhart is one of Argentina's finest storytellers."-- Asymptote Journal

"Poised somewhere between narrative and sense memory, Uhart's lens looks into sundry lives and renders the act of surveillance both venal and holy." -- Foreword Reviews

"(Uhart's stories) steadily, unobtrusively oxygenate the world around them ... Uhart helped shape a generation of writers in Argentina as both a teacher and a writer, her influence both diffuse and impossible to ignore." --Sam Carter, Music & Literature

Born in 1936 in the outskirts of Buenos Aires, Hebe Uhart is one of Argentina's most celebrated modern writers. She published two novels, Camilo asciende (1987) and Mudanzas (1995), but is better known for her short stories, where she explores the lives of ordinary characters in small Argentine towns. Her Collected Stories won the Buenos Aires Book Fair Prize (2010), and she received Argentina's National Endowment of the Arts Prize (2015) for her overall oeuvre, as well as the Manuel Rojas Ibero-American Narrative Prize (2017). About the translator: Robert Croll is a writer, translator, musician, and artist originally from Asheville, North Carolina. He first came to translation during his undergraduate studies at Amherst College, where he focused particularly on the short fiction of Julio Cortázar. Before beginning work on Animals, Croll translated several of Ricardo Piglia's works published by Restless Books.
Loading...
or support indie stores by buying on