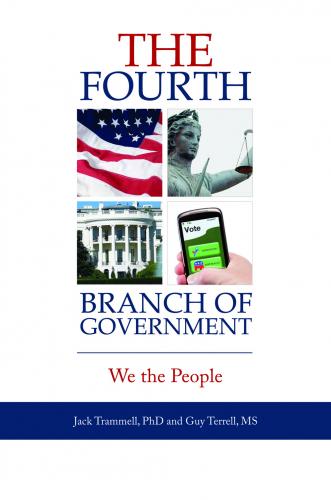 The Fourth Branch of Government

With the explosion of social media and the Internet, practically everyone in America has instant access to the news and a greater ability to follow what is happening anywhere. As a result, we are a culture and a nation that is bombarded with information. However, we are coping poorly with that assault and using an outdated framework for our governance. Many people feel disconnected from the very mechanisms and people who are supposed to represent their interests.

"The Fourth Branch of Government" is about updating the framework of our democracy. It is a movement whose time has come, and one that the Founding Fathers envisioned. This book outlines a roadmap for how change can be facilitated, as well as a rationale for why it is absolutely necessary and urgent. The only way to update our democracy and make it relevant to the 21st century is to call for a Constitutional Convention. In that forum, we can consider changes like eliminating the Electoral College, or implementing e-voting—perhaps even changes leading to a broader and more direct participation in our governance, the Fourth Branch of Government.


Praise For The Fourth Branch of Government: We the People…

“Having built my career on data management, I’d like to think I can recognize valuable information when I see it—and I definitely see it in 'The Fourth Branch.' As I read this provocative book, my preconceived ideas and assumptions about how America’s government currently works, versus how it could and should work, were challenged. I found myself agreeing with some of the authors’ ideas and disagreeing with others, which I suspect Trammell and Terrell would be happy to hear. After all, if 'we the people' really do want to take a more active hand in shaping and updating our democracy, Step One has to be a meaningful dialogue about what’s wrong, what’s right, and where we go from here. 'The Fourth Branch' will help us kick off that discussion.”
~ Dr. Peter Aiken, Associate Professor of Information Systems, Virginia Commonwealth University (VCU); founding director, Data Blueprint/Institute for Data Research

“Between a crumbling middle class, the erosion of the Constitution, and the rise of anti-democratic forces, it’s little wonder that many Americans feel a need to do something. 'The Fourth Branch of Government: We the People' suggests a path toward a more functional democracy. The authors would be the first to admit that they don’t have all the answers, but they present a creative framework both for respecting the Founders and a democracy that works effectively in the 21st century. Among other suggestions, they would prune some outworn features of our system and replace them with novel mechanisms for greater citizen participation. Highly recommended for those who want to see power return to the people.”
~ Mike Lofgren, author of "The Deep State: The Fall of the Constitution and the Rise of a Shadow Government"

JACK TRAMMELL is an award-winning author and poet whose credits include hundreds of articles and stories, and more than twenty books. He was a recent candidate for U.S. Congress in representative Eric Cantor’s seat and has enjoyed a twenty-five-year career as an educator in the public schools and as a professor and researcher in higher education. His areas of expertise include social history, disability, education, government, American history, and creative writing. He was a long-time columnist for the Washington Times. His most recent books include a history of disability in America, and a historical Civil War novella.

GUY TERRELL is a project manager, as well as an accomplished writer. He earned an M.B.A. from George Mason University, and later added an M.S. in Information Systems from Virginia Commonwealth, earning a Dean’s Scholar Award. Learning and writing are his passions. He has published poetry and is a past president and treasurer of the Poetry Society of Virginia (PSV). More recently he earned the Professional Project Management certification, PMP, to continue to work in technology and information systems. He has more recently turned his talents to helping American democracy flourish, thinking critically about our nation and its future.