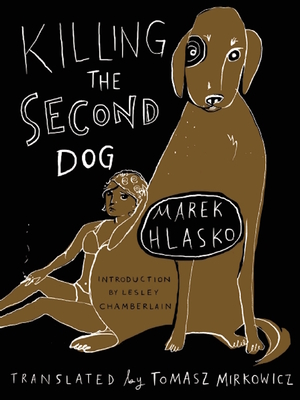 "His writing is taut and psychologically nuanced like that of the great dime-store novelist Georges Simenon, his novelistic world as profane as Isaac Babel's."--Wall Street Journal

"Spokesman for those who were angry and beat . . . turbulent, temperamental, and tortured."--The New York Times

"A must-read . . . piercing and compelling."--Kirkus Reviews

"A self-taught writer with an uncanny gift for narrative and dialogue."--Roman Polanski

"Marek Hlasko ... lived through what he wrote and died of an overdose of solitude and not enough love."-- Jerzy Kosinski, author of The Painted Bird and Being There

"A glittering black comedy ... that is equally entertaining and wrenching."
-- Publishers Weekly

Robert and Jacob are down-and-out Polish con men living in Israel in the 1960s. They're planning to run a scam on an American widow visiting the country. Robert, who masterminds the scheme, and Jacob, who acts it out, are tough, desperate men, adrift in the nasty underworld of Tel Aviv. Robert arranges for Jacob to run into the woman, whose heart is open; the men are hoping her wallet is too. What follows is a story of love, deception, cruelty, and shame, as Jacob pretends to fall in love with her. It's not just Jacob who's performing a role; nearly all the characters are actors in an ugly story, complete with parts for murder and suicide. Marek Hlasko's writing combines brutal realism with smoky, hardboiled dialogue in a bleak world where violence is the norm and love is often only an act.

Marek Hlasko, known as the James Dean of Eastern Europe, was exiled from Communist Poland and spent his life wandering the globe. He died in 1969 of an overdose of alcohol and sleeping pills in Wiesbaden, Germany.


Praise For Killing the Second Dog…

“Hlasko’s story comes off the page at you like a pit bull.”


“Spokesman for those who were angry and beat … turbulent, temperamental and tortured.”


“A must-read … piercing and compelling.”


“A self-taught writer with an uncanny gift for narrative and dialogue.”

Marek Hlasko, known as the Polish James Dean, made his literary debut in 1956 with a short story collection. Born in 1933, he was known for his brutal prose style and his unflinching eye toward his surroundings. In 1956, Hlasko went to France; while there, he fell out of favor with the Polish communist authorities, and was given a choice of returning home and renouncing some of his work, or staying abroad forever. He chose the latter, and spent the next decade living and writing in many countries, from France to West Germany to the United States to Israel. Hlasko died in 1969 of a fatal mixture of alcohol and sleeping pills in Wiesbaden, West Germany, preparing for another sojourn in Israel. Besides Killing the Second Dog, his translated works include the novels Eighth Day of the Week, All Backs Were Turned, Next Stop - Paradise, and The Graveyard, and a memoir, Beautiful Twentysomethings. Tomasz Mirkowicz: Tomasz Mirkowicz, translator of American and British fiction, was born in Warsaw in 1953. He translated into Polish the works of Ken Kesey, George Orwell, Jerzy Kosinski, Harry Matthews, Robert Coover, Alan Sillitoe and Charles Bukowski. Mirkowicz, also a fiction writer and critic, died in 2003. Lesley Chamberlain: Lesley Chamberlain is a British journalist, travel writer and historian of Russian and German culture and has published short stories and novels and written about food. Her works include Nietzsche in Turin and The Philosophy Steamer Lenin and the Exile of the Intelligentsia.
or support indie stores by buying on