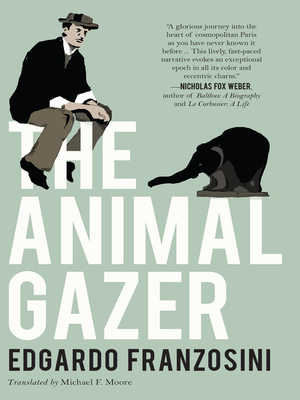 A hypnotic novel inspired by the strange and fascinating life of sculptor Rembrandt Bugatti, brother of the fabled automaker. With World War I closing in and the Belle poque teetering to a close, Bugatti leaves his native Milan for Paris, where he encounters Rodin and casts his bronzes at the same foundry used by the French master. In Paris and then Antwerp, he obsessively observes and sculpts the baboons, giraffes, and panthers in the municipal zoos, finding empathy with their plight and identifying with their life in captivity. As the Germans drop bombs over the Belgian city, the zoo authorities are forced to make a heart-wrenching decision about the fate of the caged animals, and Bugatti is stricken with grief from which he'll never recover. Rembrandt Bugatti's work, now being rediscovered, is displayed in major art museums around the world and routinely fetches large sums at auction. Edgardo Franzosini recreates the young artist's life with intense lyricism, passion, and sensitivity.

Edgardo Franzosini, born in 1952, is the author of five novels. The Animal Gazer won two distinguished Italian literary awards in 2016, the Premio Comisso and the Premio Dessi.

Reading group guide to The Animal Gazer is available free of charge at newvesselpress.com.

Edgardo Franzosini, born in 1952, is the author of five novels. The Animal Gazer won two distinguished Italian literary awards in 2016, the Premio Comisso and the Premio Dessi. Michael F. Moore has translated works by Alessandro Manzoni, Alberto Moravia and Primo Levi. Prior to becoming an interpreter at the Permanent Mission of Italy to the United Nations, he studied sculpture at the Brera Academy in Milan.

1. What did Rembrandt Bugatti see in the animals with whom he felt such a strong connection?

2. Bugatti was a member of a distinguished family. What does the reader of this book learn about his relationship to his father and his brother and how did that influence him?

3. How would you describe the development of Bugatti’s art in the period before and after the start of the First World War?

4. What contacts did Bugatti have with other artists and cultural figures? How did this influence him?

5. Discuss the situation in Antwerp during the war and how Bugatti responded to it.

6. The critic Michael Brenson praises this “memorable portrait not only of a famed yet ill-fated artist most at home in the zoo, but also of a Europe whose cruelties are infinitely more extreme than any form of animal behavior.” What does Brenson mean?

7. Describe the style in which Edgardo Franzosini has written this book and the atmosphere he creates.

8. Would you define Rembrandt Bugatti as an artist of his time and what makes his career distinctive?

9. What were the factors that contributed to the sculptor’s ultimate fate?