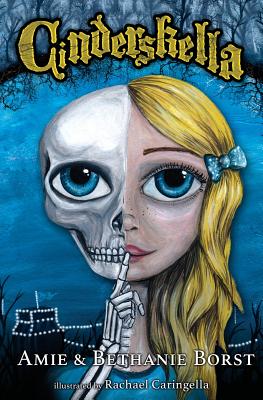 Cindy is just a normal 11-and-three-quarters-year-old. At least until she wakes up one night and finds out she's dead. Well, she isn't technically dead-she just doesn't have any hair . . . or a nose . . . or skin. Yep-all bones, no body. Human by day and skeleton by night, Cindy is definitely cursed. And because her mother recently died, Cindy has no one to turn to except a father who's now scared of her and an evil stepmother who makes her do the housecleaning with a toothbrush. To make matters worse, the Spring Fling dance is approaching, and Ethan, the cutest boy in sixth grade, doesn't seem to know Cindy exists. Of course, Cindy doesn't think letting Ethan find out she's part skeleton is the best way to introduce herself.While facing such perils as pickled pig's feet, a wacky fortune teller, and a few quick trips to the Underworld, Cindy's determined to break the curse even for a single night.

Amie Borst, a long-time writer and self-proclaimed graduate from ULE (University of Life Experience), is a native New Yorker, now residing in Northern Virginia. Originally, she aspired to be on Broadway, but her teen years were filled with too many "angsty" poems and short stories to let them fall to the wayside. She enjoys eating chocolate while writing and keeps a well-stocked stash hidden away from her family.Bethanie Borst is an all-rounder. She is a spunky 13-year-old who is an avid archer with Olympic dreams, enjoys the outdoors, loves reading, and is quick to make lasting friendships.Rachael Caringella is an illustrator and a mixed-media artist. She lives in Utah.
Loading...
or
Not Currently Available for Direct Purchase