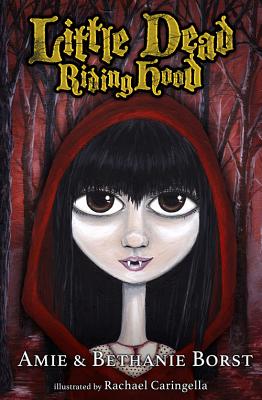 Unlike most kids, Scarlet Small's problems go far beyond just trying to fit in. She would settle for a normal life, but being a 12-year-old vampire for an entire century is a real pain in the neck. Plus, her appetite for security guards, house pets, and tomato juice is out of control. In order to keep their vampire-secret, Scarlet's parents resort to yet another move. At her new school, Scarlet not only has a strange skeleton-girl as a classmate, but a smelly werewolf is intent on revealing her secret. When Scarlet meets Granny who fills her with cookies, goodies, and treats, and seems to understand her more than anyone she's sure things will finally be different. But with a fork-stabbing incident, a cherry pie massacre, and a town full of crazy people, Scarlet's positive she ll never live to see another undead day.

Amie Borst and Bethanie Borst are the mother-daughter writing team behind the Scarily Ever After series, which includes Cinderskella. They live in Northern Virginia. Rachael Caringella is an illustrator and a mixed-media artist. She lives in Salt Lake City, Utah.
Loading...
or
Not Currently Available for Direct Purchase