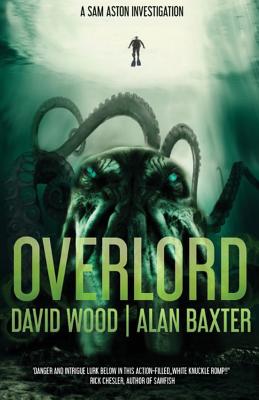 What lurks beneath the ice?

Marine biologist Sam Aston is hired to explore a series of subterranean caverns deep beneath the Antarctic. Somewhere within this lost world of magnificent caverns and underground seas lies a source of limitless clean energy, but something guards this treasure. As enemies bent on obtaining this world-changing resource for themselves close in from above, Aston and his team plunge further into the depths, and discover they are not the first to come this way...and they are not alone.

As the death toll continues to mount, Aston and his companions are forced to uncover secrets hidden far beneath the ice. Danger lurks at every turn as they face the deadly threat of the OVERLORD.

Praise for Overlord and the Sam Aston Investigations

"Renegade marine biologist Sam Aston is back for a second outing in what is shaping up to be a must-read aquatic adventure series Danger and intrigue lurk both above and below in this action-filled, white-knuckle romp with a breathtaking conclusion "--Rick Chesler, author of Sawfish

"Everything you'd want from a monster story - great characters, a remote location and a creature with bite Mixing history and lore with science and action, David Wood and Alan Baxter have penned a thriller that is hard to put down." --Jeremy Robinson, author of Island 731

"Bone-cracking terror from the stygian depths A creature thriller that is both intelligent and visceral. I could hear the Jaws soundtrack playing on repeat, although that might have been my heart pounding." --Lee Murray, author of Into the Mist

"One of the best, the most thoroughly delightful and satisfying, books that I've read in quite some time. A serious out-of-the-park type of home run hit." --Christine Morgan, The Horror Fiction Review