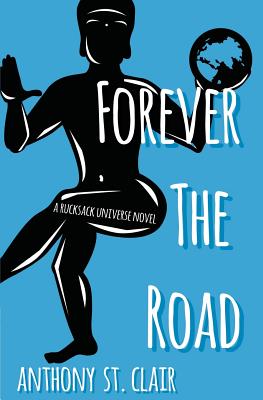 A strange eclipse looms above India's city of the smiling fire. When an ancient evil awakens, the world teeters on a razor's edge of life and annihilation.

Rootless globetrotter Jay wanted Agamuskara to be just another place he visited, but the strange object in his backpack has other ideas. In the global secret order of Jakes and Jades, destiny-changing Jade Agamuskara Bluegold stands above the rest, all the while keeping up appearances as the humble proprietor of the Everest Base Camp Pub & Hostel. However, she struggles to untangle the terrible future she foresees and to ignore her doubts about her past choices. Despite themselves, both Jade and Jay befriend the evasive, stout-quaffing Faddah Rucksack--a man without a destiny who seems determined to direct their own. As fires rage in a land of ash, a backpacker, a bartender, and the world's only Himalayan-Irish sage become trapped between their entwined fate and an impossible choice.

FOREVER THE ROAD is a captivating page-turner in Anthony St. Clair's Rucksack Universe. If you like Neil Gaiman, Terry Pratchett, or Octavia Butler, you'll love this ongoing fantasy series of globetrotting intrigue.