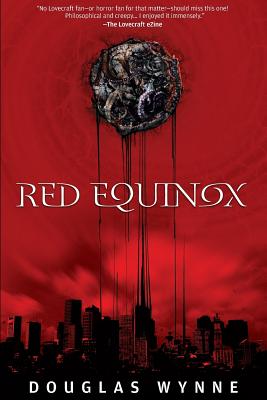 The Red Equinox has dawned, and the old gods who have slept for aeons are stirring. Urban explorer and photographer Becca Philips was raised in the shadow of Miskatonic University, steeped in the mysteries of her late grandmother's work in occult studies. But what she thought was myth becomes all too real when cultists unleash terror on the city of Boston. Now she's caught between a shadowy government agency called SPECTRA and the followers of an apocalyptic faith bent on awakening an ancient evil. As urban warfare breaks out between eldritch monsters and an emerging police state, she must uncover the secrets of a family heirloom known as the Fire of Cairo to banish the rising tide of darkness before the balance tips irrevocably at the Red Equinox.

"Douglas Wynne has accomplished a rare feat in Red Equinox. He has written a thrilling action-adventure story while at the same time melding it with hints--and more than hints--of chilling Lovecraftian cosmicism. Vivid characters, a keen sense of place, and a cleverly executed plot contribute to making Red Equinox one of the more notable novels in the Lovecraftian tradition."
--S. T. Joshi

"No Lovecraft fan--or horror fan for that matter--should miss this one! Philosophical and creepy...I enjoyed it immensely."
--Mike Davis, The Lovecraft eZine