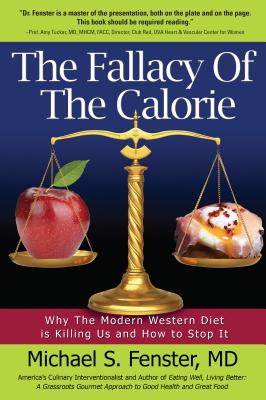 The Fallacy of the Calorie (Paperback)

Jean Anthelme Brillat-Savarin wrote in The Physiology of Taste, two months before his death, "Tell me what you eat, and I will tell you who you are." In the almost two hundred years since its publication in 1825 we have borne witness to the ultimate veracity of such a simple observation. We have seen that truism reflected in our own modern Western diet. It is a diet that delivers us unto the disabilities and diseases of modern civilization: obesity, diabetes, cardiovascular disease, gastrointestinal disease, neurologic disease, and autoimmune disease. Disabilities and diseases that have at their root a chronic, continuous low-level inflammation. Now for the first time, Dr. Mike, cardiologist and chef, reveals the how and the why of the modern Western diet. He explains how we are hardwired to seek out sugar, salt, and fat. He details how that greed for these consumables allowed us to become the most dominant species on the planet and to construct the most technologically advanced and complex social structure the world has ever known. But that progress has not come without a price. Dr. Mike identifies the changes to our food and food pathways that occurred at the onset of the Industrial Revolution and have become particularly pronounced over the last fifty to seventy-five years. Changes that have disrupted our physiology and our relationship with our symbiotic gut microbiome. Changes that have produced the modern Western diet with its dysbiosis, disabilities, and diseases of modern civilization. With the eye of a chef and a deep understanding of, and appreciation for, the experiential nature and integral role that food and cuisine have in our society, and our own personal health and wellness, Dr. Mike crafts a prescription to break the vicious cycle of addiction at the heart of the modern Western diet. This journey to an intestinal revolution to metabolic health is a "Code Delicious(TM) "

Michael S. Fenster, M.D., F.A.C.C., FSCA&I, PEMBA; known to his audiences as Dr. Mike, is a Board Certified Interventional Cardiologist. He has taught students, interns, residents, fellows and served as an Assistant Professor of Medicine at the North East Ohio University College of Medicine (NEOUCOM). Dr. Mike s culinary career began before he ever attended medical school. Starting as a dishwasher, he worked his way up to executive chef. Never one to rest on his laurels, Dr. Mike later co-managed an award winning restaurant and received his culinary degree in gourmet cooking and catering from Ashworth University where he graduated with honors. He was their alumni of the year in 2013. In addition to numerous medical lectures and presentations, Dr. Mike has lectured at the national convention of The American Culinary Federation as well as their Field to Plate series in Europe and spoken at other prestigious events like the gathering of The Chicago Culinary Historians. He has given numerous radio and television interviews on health and food both nationally and internationally.. He has been a regular on The Daily Buzz morning program as well as Daytime TV, entertaining and informing during cooking segments. He has written columns for numerous publications such as Shape, Fitness and Glamour, innumerable websites, and served as a monthly columnist for The Tampa Tribune. He currently writes a monthly column for Luxuria Lifestyles, an international lifestyle magazine and Basil, a culinary magazine. The Fallacy of the Calorie: Why The Modern Western Diet is Killing Us and How to Stop It is Dr. Mike s long anticipated follow up to his first book, Eating Well, Living Better: A Grassroots Gourmet Approach to Good Health and great Food ."
or support indie stores by buying on
Copyright © 2020 American Booksellers Association