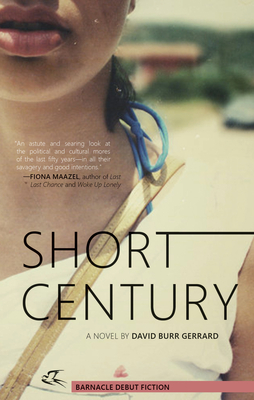 When a mysterious blogger reveals renowned pro-war journalist Arthur Hunt's long-ago incestuous affair with his smart but impressionable younger sister, Emily, Arthur writes a memoir in defense of his life, coming to terms with his shattered sense of self, his skewed political ideals, and the crumbling American empire he has been struggling to uphold. An angry but eloquent narrator in the tradition of Philip Roth and Thomas Bernhard, Arthur recounts his relationship with Emily, weaving in his claustrophobic WASP childhood, his '60s student radical days at Yale, and his vociferous support for America's war in Iraq and its continuing drone campaign. Capturing the tumult of recent American history, Short Century is filled with supporting characters as memorable as Arthur-- including Miranda, his mercurial college girlfriend; Jersey Rothstein, the charismatic free-love guru for whom Miranda leaves Arthur; their son Jason, who signs up to serve in Iraq, where he is killed; their daughter Sydney, who follows Arthur into pro-war punditry; and their daughter Daisy, who chooses to wear a burqa. With a broad historical scope but an intimate personal focus, this is a novel about America, family, and how the desire for freedom is often entangled with darker impulses.

"Short Century is the gusty debut novel from one of our most compelling new voices. Difficult to put down. Impossible to forget." Julian Tepper, author of Balls: A Novel

A sly shout at America’s backcountry ways, and a love story so brilliant and debauched it summons Humbert Humbert. Gerrard delves into a heart of darkness and emerges poised and praiseworthy.” Alex Gilvarry, author of Memoirs of a Non-Enemy Combatant

"Short Century is painfully smart, the good kind of pain. David Burr Gerrard pushes every hot button in Short Centurypersonal, familial, and politicaland dances in the fallout. If David Corn and Georges Bataille had a baby it would read like Short Century.” Tupelo Hassman, author of Girlchild

David Burr Gerrard is a writer living in Queens, NY. He's a contributing editor for Tottenville Review and his has also appeared in The Awl, The Millions, Full Stop, Specter, Extract(s), and elsewhere. He teaches creative writing at Manhattanville College. This is his first novel.
Loading...
or
Not Currently Available for Direct Purchase