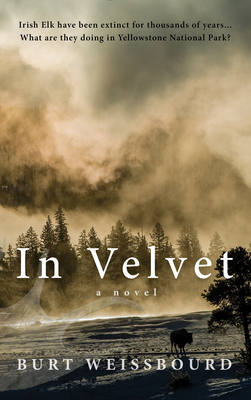 The northwest corner of Yellowstone Park is closed for bear management and Rachel, a bear biologist, is discovering some very startling animal behavior--grizzlies denning in June, swans at their wintering grounds in summer, what appear to be Irish Elk, an extinct species, with huge palmated antlers. There are also horrific mutations in the young--elk calves with no front legs, earless bear cubs, and eaglets without wings. What has gone wrong? Why is this area closed? Who's covering up these animal abnormalities in the Park? A non-stop thriller set in some of North America's wildest country, In Velvet takes you deep into the hearts of an uncommon bear biologist, a hard case local detective, and a Chicago cop as they take on a corrupt sheriff, a pathological poacher, and a lethal black ops manager to solve this ghastly mystery and restore the natural order in Yellowstone National Park.

Burt Weissbourd is a novelist, screenwriter, and producer of feature films. He graduated from Yale University with honors in psychology. During his student years he volunteered at the Museum of Modern Art in Paris and taught English to college students in Thailand. After he graduated, he wrote, directed, and produced educational films. He began a finance program at Northwestern University Graduate School of Business but left to start his own film production company in Los Angeles. He films including Ghost Story, starring Fred Astaire, Douglas Fairbanks Jr., and Patricia Neal, and Raggedy Man, starring Sissy Spacek and Sam Shepard, which The New York Times called "a movie of sweet, low-keyed charm." He's a voting member of the Academy of Motion Picture Arts and Sciences. In 1987, he founded an investment company that he still runs. Inside Passage, his first novel, was published in 2013. In Velvet is his second novel. Teaser, the sequel to Inside Passage and the second book in the Corey Logan trilogy, was published in 2014. He lives in New York City.
or
Not Currently Available for Direct Purchase