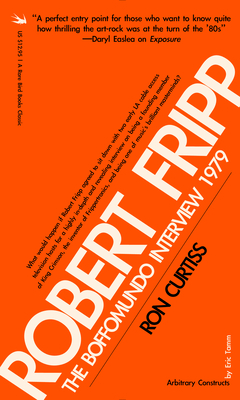 Officially transcribed from the original Boffomundo archives, including additional lost footage, Robert Fripp: The Boffomundo Interview 1979 reveals an intriguing and unique look into the mind of one music's masters of precision and creativity--all through the subtle brilliance of Wayne's World-esque early L.A. cable access hosts Ron Curtiss and Aaron Weiner. Featuring aired and unaired content from their 1979 interview, this is the first complete Boffomundo interview ever available in print or in video. Also inside are a new introduction by Ron Curtiss and additional context-creating articles and interviews. This is a gem that could have been long forgotten if not for the archival masterminding of Curtiss and his dedication to preserving the prog legacy. A must for all fans of King Crimson, David Bowie, philosophical self-inquisition, and technological wizardry.

Ron Curtiss is a music and vinyl record historian living in Studio City, California. Born in Chicago, Illinois, he grew up in a musical family (father a jazz drummer, mother a ballerina) and studied theatre arts and music in his school years. From 1979-1992, he produced a series of cable television music interview programs, beginning with The Boffomundo Show, which featured the likes of Phil Collins, John Wetton, Adrian Belew, Robert Fripp, John Goodsall, Al Di Meola, Fumio Miyashta, Bill Bruford, Armando Gallo, Larry Carlton, and many others. Ron started Boffomundo Music in 2008 to promote his vast collection of prog rock vinyl and his Boffomundo Music Channel on YouTube features various interviews and performances.
Loading...
or
Not Currently Available for Direct Purchase