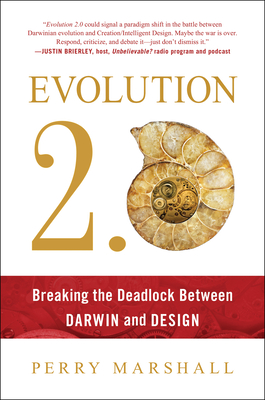 Breaking the Deadlock Between Darwin and Design

In the ongoing debate about evolution, science and faith face off. But the truth is both sides are right and wrong.

In one corner: Atheists like Richard Dawkins, Daniel Dennett, and Jerry Coyne. They insist evolution happens by blind random accident. Their devout adherence to Neo-Darwinism omits the latest science, glossing over crucial questions and fascinating details.

In the other corner: Intelligent Design advocates like William Dembski, Stephen Meyer, and Michael Behe. Many defy scientific consensus, maintaining that evolution is a fraud and rejecting common ancestry outright.

There is a third way. Evolution 2.0 proves that, while evolution is not a hoax, neither is it random nor accidental. Changes are targeted, adaptive, and aware. You'll discover:

How organisms re-engineer their genetic destiny in real time
Amazing systems living things use to re-design themselves
Every cell is armed with machinery for editing its own DNA
The five amazing tools organisms use to alter their genetics
70 years of scientific discoveries—of which the public has heard virtually nothing!

Perry Marshall approached evolution with skepticism for religious reasons. As an engineer, he rejected the concept of organisms randomly evolving. But an epiphany—that DNA is code, much like data in our digital age—sparked a 10-year journey of in-depth research into more than 70 years of under-reported evolutionary science. This led to a new understanding of evolution—an evolution 2.0 that not only furthers technology and medicine, but fuels our sense of wonder at life itself.

This book will open your eyes and transform your thinking about evolution and God. You'll gain a deeper appreciation for our place in the universe. You'll see the world around you as you've never seen it before.

Evolution 2.0 pinpoints the central mystery of biology, offering a multimillion dollar technology prize at naturalcode.org to the first person who can solve it.

Praise For Evolution 2.0: Breaking the Deadlock Between Darwin and Design…

"Marshall writes in a practical style so that all of his readers can come to understand evolution and can make a thoughtful conclusion on a controversial topic. Recommended for . . . students of biology, history of science, and religious studies, as well as researchers and scholars."
—Library Journal

"Standing on the knife-edge between traditional evolutionary theory and Intelligent Design, this book will inflame both dogmatic Darwinists and Creationists. It's irritating to both because it's friendly to the idea of evolution itself, and because it judges Darwinism too close-minded and reductive. . . . While most scientists submit to self-censorship and dare not question cherished assumptions, the boldest scientists like Albert Einstein, Francis Crick and Stephen Hawking never feared such taboos. Whether agnostics, atheists or believers, they never shrank back from big questions or unconventional solutions. Evolution and design are not either-or, but both-and."
—Jean-Claude Perez, author, Codex Biogenesis and retired IBM Biomathematics and Artificial Intelligence Interdisciplinary Researcher

"Marshall is making an invaluable contribution toward more open and honest discussion on the subject of evolution versus creation. The book is well written, often witty, and is extremely thought provoking. . . . It is amazing that this ‘non-biologist' has analyzed life phenomena at the cellular and molecular levels to such depth and width by applying information gained by cutting-edge methods in the life sciences!"
—Dr. Kwang Jeon, Editor, International Review of Cell and Molecular Biology, and Professor Emeritus, Department of Biochemistry, University of Tennessee

"Any person of faith who cares about how creation reveals God—and how evolution is actually a devastating arsenal of evidence against atheism—should add Evolution 2.0 to the extreme tippy-top of their reading list. Evolution 2.0 is equally shocking to both atheists and Christians, a genuine eye-opener in a category of its own."
—D. Bnonn Tenant, ThinkingMatters.org.nz

"A very readable book and a devastating attack on the neo-Darwinist orthodoxy that evolution is nothing but natural selection acting on random variation."
—Peter Saunders, co-director, Institute of Science in Society, and Emeritus professor of Applied Mathematics, King's College, London

"With considerable wit and amazing insight, Marshall delivers a compelling and forceful synthesis that sets a new standard for discussions about the relationship between science and faith. The result is no less than astonishing."
—Mark McMenamin, Professor of Geology, Mount Holyoke College

"A remarkable and useful resume of the state-of-the-art of this great problem of science."
—Stuart Pivar, author, Lifecode and On The Origin of Form, and cofounder, New York Academy of Art

"I am committed to Young Earth Creationism, and thus cannot agree with some of Perry's conclusions. However, I highly recommend this book to any skeptic who is committed to a purely materialistic paradigm. The science presented here - from the latest research to the most engaging minds on this subject—make this the one book you should read."
—Ray Glinski, MS in Biochemistry, Pastor at Grace Church of DuPage

"Evolution 2.0 is a modern philosophical marvel unlike anything I have read in my years of study. It allowed me to put down my guard. The author was not compelling me to believe in an ideology, but rather taking me alongside his journey of self-discovery. I came into this book hesitant. As a staunch creationist I found myself trying to fight with Marshall early on, but his arguments and presentation were flawless and compelling. It was refreshing to see someone examine both sides honestly."
—Marie Sarantakis, Comparative Religion Scholar, Carthage College

"Armed with computer science and electrical engineering, Perry fights an uphill battle to unite the space between those who believe evolution is random and those who believe species are designed by God, who in some cases deny evolution itself. . . . Judge this book by the science within its pages—and enjoy the story."
—Andras Pellionisz, Biophysicist, Founder of Fractogene; PhD, Computer Technology, PhD, Biology, PhD, Physics

"Sometimes the only way a puzzle gets solved is when someone looks at it with fresh eyes. Perry Marshall is an engineer who started to investigate biology. His book could signal a paradigm shift in the battle between Darwinian evolution and creation/ID. Maybe the war is over. Respond, criticize and debate it . . . just don't dismiss it."
—Justin Brierley, host, Unbelievable? radio program and podcast

"Evolution 2.0 is clearly the best book I have read on the topic. It helped me far better understand the fallacy of random mutations and how they are really introduced. This is something I was never taught in genetics in undergrad or medical school."
—Joseph Mercola, M.D., New York Times bestselling author of The No-Grain Diet and Effortless Healing

Perry Marshall is an author, speaker, engineer, and world-renowned business consultant in Chicago. With a decade of research, he brings a fresh perspective to the 150-year-old evolution debate. Bill Gates of Microsoft and the founders of Google revolutionized software and the Internet through their status as outsiders. Similarly, this book harnesses a communication engineer's outsider's perspective to reveal a century of unrecognized research and discoveries. Evolution 2.0 resolves the conflict between Darwin and Design, opening new avenues of science research and raising tantalizing new questions.

Perry's work in digital communications, control systems, acoustics, and e-commerce bring practical insight to questions about nature and science. His books include 80/20 Sales and Marketing, Ultimate Guide to Google AdWords, and Industrial Ethernet. He has a degree in Electrical Engineering. He's consulted in over 300 industries, from computer hardware and software to health care and finance.
Loading...
or support indie stores by buying on