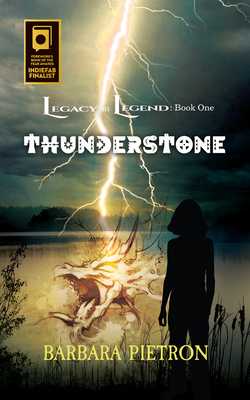 “…well-written and entertaining,” adding that “… Jeni makes for a likeable protagonist that readers will identify with.” –Publisher’s Weekly

Sneaking out at night, driving without a license, and falling for a guy weren't things fifteen-year-old Jeni expected to do while visiting Lake Itasca, Minnesota with her family. The guy, Ice, turns out to be the local medicine man's apprentice, and when he tells Jeni she's connected to the spirit world, her first instinct is to run. But after Ice's stories of a mythical underwater monster - that Jeni allegedly released - prove true, she realizes it's up to her to contain the beast. Jeni must first convince herself that she's able, and then save the locals, Ice, and ultimately herself.


Praise For Thunderstone (Legacy in Legend #1)…

"...well-written and entertaining... Jeni makes for a likeable protagonist that readers will identify with." — Publishers Weekly

After years in the corporate world, Barbara Pietron found herself with a second chance to decide what she wanted to be when she grew up. Her lifetime love of books and the written word returned one answer: writer.

Pietron’s Book One of the Legacy in Legend series, Thunderstone (Scribe Publishing Company, 2013), was a finalist for Indiefab’s 2013 Young Adult Book of the Year by Foreword Reviews, and in 2012 Thunderstone was a quarter-finalist in the Amazon Breakthrough Novel Award contest. As such, Barbara won a full manuscript review from Publishers Weekly, which called Thunderstone “…well-written and entertaining,” adding that “… Jeni makes for a likeable protagonist that readers will identify with.”