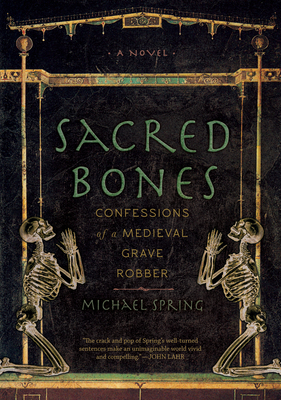 Confessions of a Medieval Grave Robber

Sacred Bones is based on the true story of Deusdona ("God's gift"), a ninth-century Roman deacon who worked in the catacombs, digging up worthless bones and selling them off as the holy remains of saints and martyrs. Deusdona thanked God for his worldly success, but he was also a clever businessman who knew how to strike deals with abbots and kings. It didn't hurt that no church could be sanctified without a relic in residence, and that the more relics a church displayed, the more pilgrims came to visit with their coins and their prayers. Deusdona was a Willy Loman of the Dark Ages, trafficking in bones. Every spring, when the snows melted from the Alpine passes, he traveled north with his "samples" - arms, cheek bones, toes - filling orders from the previous summer and drumming up business for the year to come. Whether he is floating in the buff in Charlemagne's baths or gathering body parts in Rome's underground City of the Dead, Deusdona offers us a vivid portrait of daily life in the early Middle Ages at an early stage in the transformation of ancient Rome into the City of God. Sacred Bones is both a medieval whodunit and a wry portrait of an age that has seldom been brought to life in such detail. Readers will relish the chance to immerse themselves in this oddly contemporary world.

Michael Spring was born in New York City in 1941. He has degrees in English Literature from Haverford and Columbia University. After his junior year in college he spent ten months hitching around the world. On his return, he worked for more than two decades as editorial director of Fodor's Travel Guides and publisher and vice-president of Frommer's Travel. He and his wife Janis have written three books together -- After the Affair (HarperCollins), How Can I Forgive You? (HarperCollins) and Life with Pop: Lessons on Caring for an Aging Parent (Penguin). They live in Westport, CT.
Loading...
or support indie stores by buying on