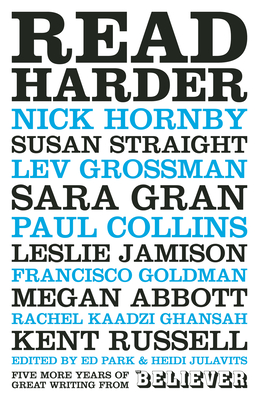 This volume collects the finest essays from the second half of the Believer's decade-long (and counting) run. The Believer, the McSweeney's-published four-time nominee for the National Magazine Award, is beloved for tackling everything from pop culture to ancient literature with the same sagacity and wit, and this collection cements that reputation with pieces as wildly diverse as the magazine itself. Featured articles include Nick Hornby on his first job, Rebecca Taylor on her time acting in no-budget horror movies, Francisco Goldman on the failings of memoir in dealing with personal tragedy, Megan Abbott and Sara Gran on V.C. Andrews and the secret life of girls, and Brian T. Edwards on Western pop culture's influence on Iran. Read Harder collects some of the finest nonfiction writing published in America today, from the profound to the absurd, the crushing to the uplifting. As the Believer enters its second decade, Read Harder serves as both an essential primer for one of the finest, strangest magazines in the country, and an indispensable stand-alone volume.

Ed Park is a founding editor of the Believer and the author of the novel Personal Days. Heidi Julavits co-founded the Believer in 2003. She is the author of four novels, including the PEN-award-winning The Vanishers.
Loading...
or support indie stores by buying on