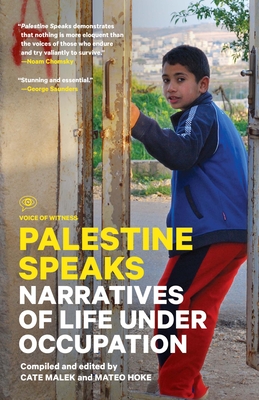 Narratives of Life Under Occupation (Voice of Witness)

The occupation of the West Bank and Gaza has been one of the world's most widely reported yet least understood human rights crises for over four decades. In this oral history collection, men and women from Palestine--including a fisherman, a settlement administrator, and a marathon runner--describe in their own words how their lives have been shaped by the historic crisis. Other narrators include: ABEER, a young journalist from Gaza City who launched her career by covering bombing raids on the Gaza Strip. IBTISAM, the director of a multi-faith children's center in the West Bank whose dream of starting a similar center in Gaza has so far been hindered by border closures. GHASSAN, an Arab-Christian physics professor and activist from Bethlehem who co-founded the International Solidarity Movement.

Cate Malek and Mateo Hoke began working together in 2001 while studying journalism at the University of Colorado-Boulder. Their interest in human rights journalism began on a project in which they spent eight months interviewing undocumented Mexican immigrants about their daily lives. Cate now lives in the West Bank where she works as an editor and teaches English at Bethlehem University. She previously worked as a newspaper reporter, receiving multiple Colorado Press Association awards. Mateo holds a master's degree from the University of California-Berkeley Graduate School of Journalism. In addition to his work in the Middle East, he has reported from the Amazon jungle and the Seychelles. His writing has received awards from the Overseas Press Club Foundation and the Knight Foundation, among others.
or
Not Currently Available for Direct Purchase