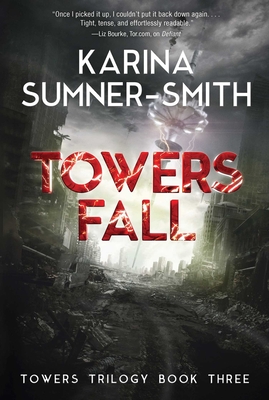 War. Fire. Destruction. Xhea believed that the Lower City had weathered the worst of its troubles—that their only remaining fight would be the struggle to rebuild before winter. She was wrong.

Now her home is under attack from an unexpected source. The Central Spire, the City’s greatest power, is intent on destroying the heart of the magical entity that resides beneath the Lower City’s streets. The people on the ground have three days to evacuate—or else.

With nowhere to go and time running out, Xhea and the Radiant ghost Shai attempt to rally a defense. Yet with the Spire’s wrath upon them, nothing—not their combined magic, nor their unexpected allies—may be strong enough to protect them from the power of the City.

From Nebula Award–nominated author Karina Sumner-Smith, Towers Fall is a fantastic climax to this amazing and thought-provoking trilogy.

Karina Sumner-Smith is a Canadian author of fantasy, science fiction, and young-adult fiction. Her short fiction has appeared in The Living Dead 2, The Best Horror of the Year Volume Three, and Children of Magic, among other anthologies. Her short stories have also been nominated for the Nebula Award and have been translated into Czech and Spanish. She lives in rural Ontario, Canada.
Loading...
or
Not Currently Available for Direct Purchase